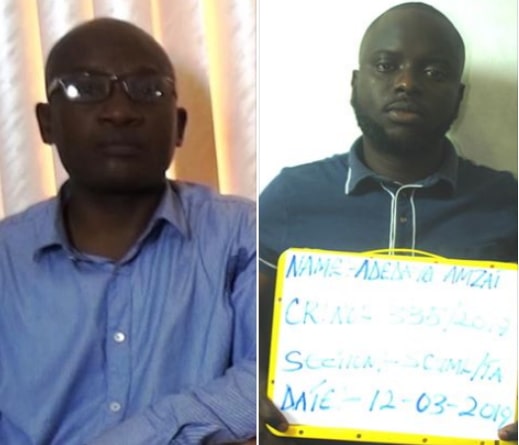 The first suspect, Edenya, allegedly delivered forged letters purportedly originating from the EFCC’s Special Control Unit against Money Laundering, SCUML, to both Access Bank Plc and Coronation Merchant Bank Plc on Friday, August 15, 2018, requesting the account opening package and statement of account of one Rotimi Williams Monye as well as that of his company, Giltedege Partners and Advisory Services Limited.

Edenya, in his statement to the EFCC, stated that the letters were given to him by the second suspect, Amzat, to deliver on behalf of the Commission to the banks.

He further confessed that he posed as an employee of the Commission when he carried out the alleged criminal act at the respective bank.

However, the second suspect, Amzat, denied any knowledge of the said letters.

Investigation revealed that the forged letters bore the name Monye, a former employee of the second suspect, Amzat.

The suspects will soon be charged to court as soon as investigations are concluded.