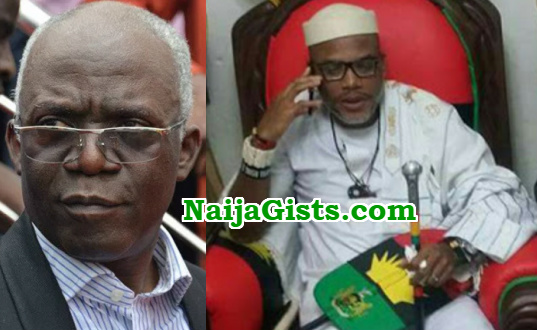 “I wish to submit, without any fear of contradiction, that the deployment of armed troops in Abia state and the house arrest of Mr. Kanu are illegal and unconstitutional.

“The deployment of armed troops by the President and Commander-in-Chief of the armed forces cannot be justified in law.”

“In view of the foregoing, the President should direct the armed troops who have invaded Aba in Abia State to withdraw and return to their barracks forthwith.

“At the same time, the Commissioner of Police in Abia state should be allowed to take over the case of Mr. Kanu in line with the provisions of the Constitution and the Police Act.

“If he is indicted in the investigation that is expected to be conducted by the Police he should be charged to court as he is not above the law.

“But on no account the army should the army be involved in the arrest, investigation and possible prosecution of Mr. Kanu or any other civilian in the country”.

Continue Reading
You may also like...
Related Topics:falana, ipob, kanu