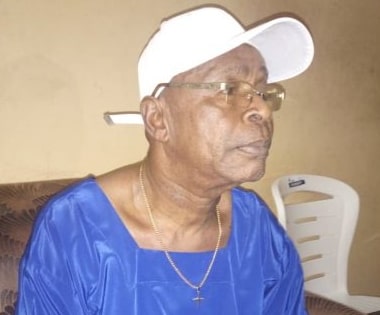 A Biafra prophet Anthony Nwoko has been assassinated at his home in Enugu. Until recently, Nwoko was a close ally of leader of the Indigenous People of Biafra (IPOB), Nnamdi Kanu, who prayed for him and the group.

According to Saturday Sun,  the man of God said to be in his late 60s was gruesomely murdered by unknown assailants last Sunday night, at his apartment located at No. 18 Ezebinugwu Street, beside Bright Land International School, Ugbene II, in the Trans-Ekulu-Nike area of Enugu. Nwoko hailed from Umuahia in Abia state.

Nwoko lived alone, so, it was gathered that his assailants had easy access to his apartment way without any hindrance but his death became known when a neighbour who noticed that the door of his apartment was ajar; entered after calling him for a while and saw the man in the pool of his blood. It was at that point that the caretaker of the compound was called, then the police were alerted and they came to the scene.

Information about his death however got to newsmen on Thursday night while the Enugu police spokesman, Ebere Amaraizu confirmed the death on Friday, saying the Commissioner of police, Suleman Balarabe had directed the homicide unit to commence investigation into the brutal murder.

Before his death, Nwoko had taken to the social media, particularly Facebook to speak about his relationship with Kanu, which according to him, went sour after the IPOB leader made him relocate from Lagos to Enugu only to abandon him.

His last posts on Facebook were at about 1:40pm on April 14, where he uploaded various online reports of his views on Biafra agitation including video clips from Kpakpando TV. He had in press conferences on January 8 and March 18, 2019 respectively, accused Kanu and some other pro-Biafra campaigners of turning the agitation to money making venture.

In fact, he had clearly raised the alarm that he was receiving death threats from members of IPOB over his bribery allegations against their leader, Kanu.

The cleric had claimed that Kanu collected huge sums of monies as bribe from the presidential candidate of the People’s Democratic Party (PDP), Atiku Abubakar, in the build up to the February 23 election to rescind the election boycott order issued by the pro-Biafra group.

“They have been calling me with different lines, making different phone calls, threatening my life. They are calling me fake because I stand by the truth. I went to Kuje prison to pray for Nnamdi Kanu and the next court case he was released.

“I went to Affara-Ukwu to tell him the way forward; he did not listen. Many people are not listening to the voice of God and they want me to be that way. Prophet Nwoko says no. I will never compromise.

“Even if they kill me, I will return with the light of heaven. I am not afraid of the people of the world. I am telling Uche Mefor and IPOB to stop threatening my life. Let me put this straight to everyone; I am ready to die standing by the truth because that is what Jesus Christ came for. If everybody will keep quiet, this nation will be destroyed. If everybody will keep quiet, Biafra will not come. Let people know the truth.”

However, IPOB’s deputy leader, Uche Mefor, who replied Nwoko then, described him as an ingrate who had benefited so much from IPOB leader, Kanu.

Mefor had said: “Let it be on record that Nnamdi Kanu rescued fake prophet Nwoko from destitution on the streets of Ajegunle in Lagos where he was dumped following his deportation from the United States.

“It was the same Nnamdi Kanu that took him to Enugu and later paid for his accommodation. Even from prison Nnamdi Kanu authorised for him to be moved to a one-bed apartment, which he paid for from detention in Kuje. This prophet of Baal visited Afaraukwu in 2017 to felicitate with Kanu and to ask for more money to open a ministry and be like Father Mbaka, but Kanu turned him down and since then he has been bitter.”

IPOB has also denied having a hand in the death of Nwoko and blamed the government and its security agencies which they said could go to any length to tarnish the popularity of the group.

Reacting to Nwoko’s death, yesterday, IPOB’s Director of Media and Publicity, Emma Powerful, stated that the spate of abductions and killings across Biafra land recently, was enough proof that the security agencies would commit whatever atrocity they can, in the hope of implicating IPOB.

“IPOB is well aware that Nigerian government and her security agencies will go to any length to stain our unimpeachable reputation in the hope of using it as a cover to continue their ongoing unreported war against IPOB,” he stated.

He further warned the media to be mindful in order not to prejudice the reportage of the yet to be investigated circumstances surrounding the passing of the prophet.