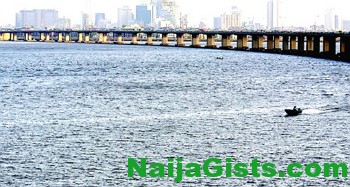 A family member of the man that jumped into a lagoon in Lekki Lagos has reacted to the incident.

The source told The Nation that the man left his Ondo State residence three days ago to attend a church programme at the Redemption Camp.

He said the family was yet to establish the reason behind the act and declined further comments.

The man, Adekunle Oluseyi John, reportedly took off his clothes, phone, wristwatch, wallet, band and shoes before jumping into the water at about 10am.

LCCI officials, on getting the information, checked their Close Circuit Television (CCTV) footage and realised it was true, before alerting emergency workers.

Oluseyi’s wallet contained two Automated Teller Machine (ATM) cards and there was no cash inside.

As at press time, officials of the Lagos State Emergency Management Agency (LASEMA) and the Lagos Waterways Authority (LASWA) were yet to find Oluseyi.

He said: “We cannot say whether he is dead or alive. All we can say right now is that he is missing. It is confirmed that the man jumped into the lagoon.

“LASWA, LASEMA and Marine Police have been searching for him since we got the distress call from LCCI.
“From the CCTV footage, he suddenly pulled off his clothes and shoe. He looked to be sure there was no one around him and jumped into the lagoon.

“We are making efforts to find him alive or recover the body. His family has been contacted and all items found on him have been handed over to the police.”