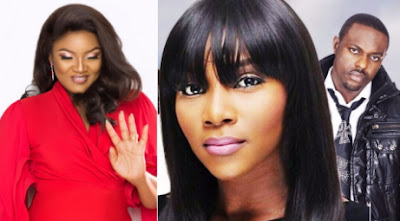 January 14, 2018 – Top 10 Nollywood Actors Who Have Featured In Hollywood Movies

Funke Akindele recently made history as the first Nigerian actor to feature in Marvel comic series.

The actress popularly called Jenifa is being celebrated all over the world for the feat.

Apart from Funke Akindele, here are some other Nollywood actors who have featured in some Hollywood movies in the past;

Olu Jacobs, who, still very much into acting, has starred in several British television series and international films. The veteran actor was an immigration officer in the 1980 war film, ‘The Dogs of War,’ which was directed by John Irvin and starred Christopher Walken and Tom Berenger.

Another actor that has made Nollywood proud is Stanley Aguzie, who starred in the movie ‘Vikings’, a season of Irish-Canadian historical drama television series. He also featured in ‘Into the Badlands’ as a loyalist to Quinn, a Baron of the Badlands. Aguzie also featured in an English documentary titled ‘Teens Who Kill showing’ aired on CBS.

Taiwo Ajayi-Lycett, another renowned actress who returned to Nigeria in 1971, has featured in stage plays in London, before her return home. Her acting debut was said to have started in December 1966 in Wole Soyinka’s ‘The Lion and the Jewel,’ a two-act comedy directed by William Gaskill at the Royal Court Theatre in London. Her acting debut was not planned; she was in the rehearsal hall of the play when she was asked by Gaskill to be a participant.

After the encouragement she received following her performance and the invitations from producers that followed, she decided to take a career in acting seriously. She enrolled at the Guildhall School of Music and Drama. In 1972, she left her corporate career and joined the Traverse Theatre Group for the Edinburgh Festival. She was later in a string of television and stage shows. In 1973, she was in Amadu Maddy’s play Life Everlasting at the Africa Centre, London, and later in the year, she was in Peter Nichols’ The National Health during the Festival of British Theatre. In 1976, she played the lead role in Yemi Ajibade’s Parcel Post at the Royal Court Theatre. Together with the actor Louis Mahoney and the writer Mike Phillips, she was a director with the Black Theatre Workshop in London.

With younger generation taking charge, we have had a number of them take their chances on the big screen too.

Osas Ighodaro Ajibade, in ‘Where Children Play,’ played the character Nia in 2015, starring alongside Grammy Award winner Macy Gray, Brian White and Teyonah Parris. The movie directed by BAFTA/LA winner, Leila Djansi, tells the story of a young woman who is forced to face her childhood demons after she returned home to care for her ailing abusive father.

Jim Iyke, in 2013, played the role of Zuma in ‘And Then There was You’ alongside Lynn Whitfield, Garcelle Beauvais, Greg Vaughan, Leon Robinson, Kate Nauta and Trilby Glover. The film tells the story of Natalie, who decides to pick up the pieces of her life after her husband, leaves her for the family he has outside. She falls in love with Darrell, who also has secrets of his own.

Genevieve Nnaji also starred in the movie, ‘Farming’, based on Adewale Akinnuoye-Agbaje’s childhood. The autobiography movie tells the story of a young Nigerian boy who is ‘farmed out’ by his parents to a white British family in the hope of a better future. Instead, he becomes the feared leader of a white skinhead gang. The movie features Nnaji alongside Hollywood actors Kate Beckinsale, Damon Idris and Gugu Mmbatha-Raw.

Another Nollywood actress that has graced Hollywood is Stephanie Linus Okereke, who in 2014, shared pictures from the set of the movie ‘Boonville Redemption’, where she played the role of a slave girl named Doris. The film starred the actress as a compassionate woman from the second generation of slave trade in America, whose parents came from Nigeria. The faith-based Western movie set in 1906, which was shot in Los Angeles, is about an angry young girl trying to find out what happened to her father. It also starred Pat Boone, Diane Ladd, Edward Asner, Emily Hoffman, Nicholas Neve Shari Rigby and Richard Tyson.

Omotola Jalade Ekeinde made her US TV debut when she starred in the VH1 American drama television series ‘Hit the Floor’. Starring in the fifth episode (titled ‘Keep away’) of the first season. Omotola made a five-second appearance mid-way in the drama series when she waltzed past pop star Akon who also made a star guest appearance. Omotola acted as Akon’s date for the event they attended in the show. Akon had, however, had an earlier appearance where he gave out his diamond earpiece to charity while flirting with one of the series’ regulars – Kyle (played by Katherine Bailess). In her cameo appearance, Omotola was complimented for ‘looking beautiful’ by Kyle while walking down with Akon.

Richard Mofe Damijo, BasketMouth, Uti Nwachukwu and Kemi Adetiba in 2015 were reported to have been selected by international beer brand Heineken to share spotlight with stars of the next instalment of James Bond series, Spectre.

The artistes were to represent Africa at the premiere of the new series joining international top shots in Las Vegas for what has been described as the first-ever selfie from space as part of Heineken’s new campaign, Spyfie.

This is not the first time RMD will be enlisted for international project. The former Commissioner of Culture and Tourism in Delta State was a star attraction in the Guinness 2004 film, ‘Critical Assignment’, playing alongside South African Cleveland Mitchell, aka Michael Power, in the flick that featured another Nigerian actor, Bukky Ajayi who is now late.