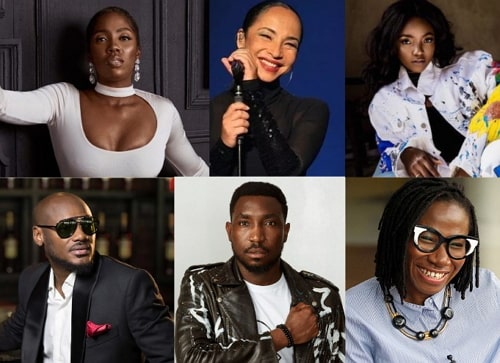 Here are six artistes with impressive fan base and net worth.

Known for his speedy rise to stardom, he is a local and international favorite. Burna Boy is worth an estimated N 1.27 billion.

She is probably the most famous female Nigerian musician with a strong fan base and a net worth of about N 1.7 billion.

A recipient of several music awards and nominations, he seems to know the secret to a long career in the Nigerian music industry. 2Face is worth about N 15 billion.

His name is known within and outside the shores of Nigeria. He is internationally recognized and possesses quite an influence too. D’banj is worth an estimated N 16 billion.

He definitely makes the list of most famous. Wiz Kid’s career in music has been a complete success so far. His singles and albums are back to back hits. He is worth an estimated N 20 billion.

A close competitor of Wiz Kid in fame, music and general career success, Davido is one musician whose music is known globally. He is worth about N 20 billion.

The Nigerian music industry is a bit stiff for the female population. But a few have managed to rise above this.

Teniola Apata or Teni for short as she is widely known is a female Nigerian songwriter and musician. She launched her debut album in 2016.

The star began her rise to fame almost immediately her music career kicked off. She has since won awards like the 2018 Headies, Soundcity MVIP Awards and Nigeria Entertainment Awards. After such a short time in the music industry, this is quite a remarkable feat.

Teni is popular for songs like Case, Uyo Meyo, Sugar Mummy, and most recently Billionaire. She is the younger sister of female music artiste Niniola.

This musician is one of the most popular female musicians in the Nigerian music industry. Born on February 5th, 1980 somewhere in Lagos state, Tiwa moved to the U.K when she was about eleven years of age.

She started her music career doing backups for known international music stars. Tiwa eventually came back home and was signed to the Mavin Records in 2012. She released her debut album the following year.

Since then, she has indeed made a name for herself and she managed this despite the many huddles female Nigerian musicians face when trying to make a name in the industry.

She exited Mavin Records in 2019 and was signed into an international music organization. On her exit, she got high praises from Mavin Records boss Don Jazzy for her commitment and sacrifice towards the building of this brand.

She was formerly married to Tunji Balogun/T. Bliss and has a son from the union. Tiwa is popular for songs like My Darling, All Over, Ife Wa Gbona and many more.

The musician not only has unique vocals, but she is also unique for her style of music. It is not common knowledge but this star began her career as a gospel artist, before making a switch.

Her first album was released in 2008 and she has since released two additional albums as well as several hit singles. Simi has received awards and nominations like The Headies, BET Awards, Nigerian Entertainment Awards and such.

She heads her own record label which was founded sometime in June 2019; her label is called Studio Brat. The artist is married to Nigerian musician Adekunle Gold. The couple tied the knot in 2019.

She rose to fame in 2009 after winning the Peak Talent Show. In 2014, she released her debut album King of Queens, but she is best known for her single titled Johnny. In 2016 she released her second studio album Mama Africa. She has also featured in soundtracks of the international movie, The Lion King alongside stars like Beyonce, Tekno and Mr. Eazi.

This beautiful Nigerian star hails from Edo state. She owed a part of her education sponsorship to Arch Bishop Benson Idahosa, who after been marveled by her talent for music, took up the sponsorship of her secondary school education.

Her career in music began while she was at the University of Nsukka in 2007. She further made a name for herself after being featured in the track Do me by then music duo P-square. She has two studio album releases to her name W.A.J.E released in 2013 and Red Velvet released in 2018.

Waje has performed alongside international artistes like Kerry Hilson and Wyclef Jean. She has also featured in some Nollywood movies first of which was titled ‘Tennel’. This artist has a long list of awards and award nominations to her name.

Omawumi was born on 13th April 1982. She is a song writer, musician and actress. The popular Tv show West African Idols brought her into the limelight.

Her second album release is said to have cemented her career as a top female Nigerian musician. She is an ambassador for brands like kong.com, Malta Guinness and Globacom.

So far, she has had four studio released albums and has featured in a few Nollywood movies, Make a Move and Inale are two prominent ones.

The female singer rose to prominence after participating in the 2010 Project Fame West Africa, where she emerged the winner of the competition. Her award winning track Emi Ni Baller earned her quite the recognition by topping notable music charts.

Her first studio album called Chidinma was released in 2012. She has since received several awards from well known award outfits like MTV Africa Music Awards, City People Entertainment, Kora Awards, to mention but a few.

She contested in the Project Fame West Africa (season 6) where she made it to the spot of the third runner up. Following the release of her track “ibadi” in 2014, she was nominated for the 2015 awards for Most Promising Act to watch that year.

Her second single titled Maradona was a total hit. It earned her a SAMA Award nomination as well as a BET Award. She has since gone on to get a number awards and nominations.

Her birth name is Hadiza Bello, but Di’ja is what we all know her as. A singer, song writer and part of the Mavin Records team. She can be termed as mixed since her father is a native of Sierra Leone and her mother hails from the Northern part of Nigeria. Di’ja’s music career is said to have begun in 2008.

She has a number of songs credited to her: Omotena and Dan Iska, she also featured in songs like Adoabi and Dorobucci alongside the Mavin Record team.

The group formerly constituted of Nigerian artistes Faze, Blackface and 2Face. The group used to sing the Naija Hip-Hop and R&B genre of music.

Their first album was released in the year 2000 and the group gained a lot of fame in its time. Plantashun Boiz split up in 2004, but recorded a final album in 2008.

Popular tracks of the group are You and I, Plantashun Boiz, Ememma, Iwo Ni Mo Fe, Say You Believe Me and others.

It was originally made up of Shifi, Tunde, Yemi and Lanre which made up their stage name Styl. Following the death of Lanre, a new member, Zeal was added to the group thereby changing the name from Styl to Styl Plus. The number of this group dropped further, with Yemi’s exit in 2002 bringing the number down to three.

The group’s music favored the R&B/ Pop category. Styl Plus is known to have released three successful albums Expressions, back and Better and finally Unbreakable.

Styl Plus has not officially been disbanded, but it is currently made up of only Shifi and Zeal, as Tunde is believed to have also exited this group sometime in 2017.

You may remember this group for songs like: Olufunmi, Stay Alive, Hadiza, Call My Name, Mase and others.

Criminals Lure Facebook Friend From Imo To Anambra, Kill & Dump Body In Bush
How To Start A TV Station In Nigeria