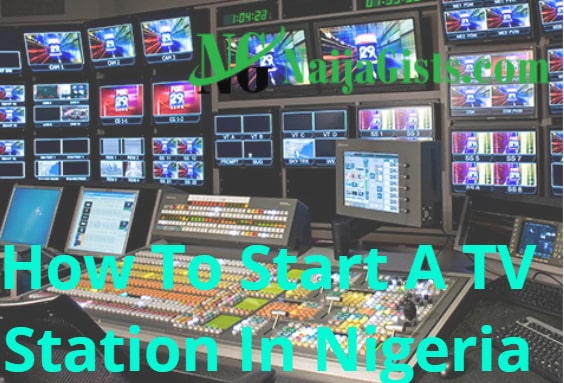 How To Start A TV Station In Nigeria

The advent of television is dated back to 1959. This was the birth of the first television station in Africa. It was called the WNTV (Western Nigeria broadcasting corporation) located in the ancient city of Ibadan. This and many others earlier established bare regional coloration. Instead of non-partisan information and communication, they were used to propagate tribal and regional political ideas. This was used until the unified television broadcasting channel called the NTA (Nigerian Television Authority)

Before we delve into how to start a TV station in Nigeria, we need to know the antecedents of television broadcasting in the nation. Television as one of the public channels of communication has created a higher demand for an audio and video means of information. It is a means of interaction between the government and the populace. As good as television maybe, a single distortion in information can whip a negative emotion among the citizenry, consequently this informed member of the public can react negatively both to the government and themselves.

Often those fake news or information creates bad blood among those who were once allies. But if the correct information is passed to the people it could douse serious tension among the people. This, in turn, will preserve the sanctity of the community. To be candid, there is no fast rule on how to start an online tv in Nigeria. But let me show a few of the requirements.

How to start a Television station in Nigeria

Along with the registration form is the article of association and memorandum of understanding of your company.  The former is contain the details of the company’s names and its particulars which also includes the names of the directors and shareholders forming the company. The latter is like the operational manual of the company. This is how the company is to be run by all stakeholders.

These are presented along with the form to be submitted to the cooperate affairs commission. The fees for intention called the stamp duty must have been paid to the Inland Revenue agency of the federal government.

Once the commission is satisfied with the submitted documents, approval will be sought from the president who has the autonomy to grant such permission. This is done through the ministry of information. Upon approval, which is subject to review every five years. After that, an inspection team will visit the site to verify the company’s claim. This is after the right frequency has been approved. The NBC inspection team must be on the ground to see and watch the test run exercise to see how it works.

The cost of running a radio, television, or satellite broadcasting station in Nigeria.

Running a television or radio station cost so much. For a start, a TV station must have a minimum of ₦100,000 share capital. The following are what takes the money.

Apart from the registration what takes the larger chunk of the investment is the facilities. Some of the facilities needed for any broadcasting station are listed below.

Accommodation. This is what houses all other assets and facilities to facilitate the smooth running of the organization. Whether it is a radio or television station, the size or location will dictate the cost. Accommodation in Lagos, Abuja, and Port Harcourt will cost more than any other place. Choosing between a rented apartment and a permanent site of your own will equally shape your starting capital and overall cost. Your accommodation acts as both your transmitting station and your office where you transact your business.

Establishing a community radio in Nigeria is similar to establishing any broadcasting network in Nigeria. But there are a few differences between community radio and the regular radio station.  For instance, a community radio would be registered as a non-profit organization. The channel focuses on local content for the benefit of the community. It is a link between the government and the citizens. A  community station like that is helpful because it easier to get the government plan and policies across to the people. You can call it the mouth of the government.  Apart from that, instead of paying #50,000 like other channels, community radio will pay #10000. This is in addition to providing all the necessary documents. The document is the same as other communication channels

One thing is certain. Running any broadcasting station in Nigeria requires huge capital. On average, it will cost about #70,000000 to start a radio or television station. This, however, depend on your taste and the type of broadcasting station you wish to open. In the cost of planning, you have to decide whether you are running a unit or multiple stations. A single station means you focus on a niche in broadcasting and entertainment. As such, a specific area like sports, news, entertainment, local or community news, etc. The other option is to be an all-purpose station where you feature on all aspects of broadcasting, publicity, and entertainment.

Today broadcasting remains a lucrative business to those who have the financial muscle to pull through. Though I have shown you how to start a television station in Nigeria, you must do your visibility of the business. This is necessary as policies changes and prices are not stable, However, your visibility study should be realistic on your expectations on your profit margin.