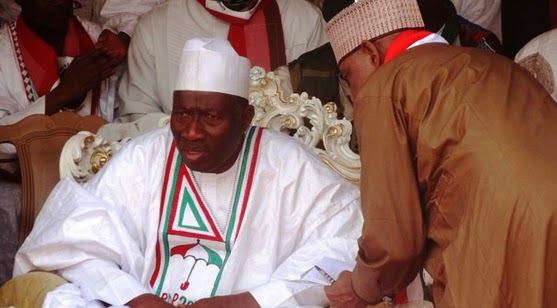 President Jonathan is alleged to have given many traditional rulers in Yoruba land millions of naira to champion his campaign, while the Afenifere elders are also accused of collecting dollars to support Jonathan’s ambition.

The governor, who spoke at the All Progressives Congress, APC, rally in Shomolu, Lagos, southwest Nigeria, on Tuesday said the Yoruba needed to rethink, saying that posterity would judge those who collected the money to betray the Yoruba people.

“The Yoruba need to have a rethink. Some Yoruba leaders have betrayed us the yoruba because of money. This election is for freedom.

“And this was how it happened in the past which prompted the late Hubert Ogunde to sing one of his songs titled ‘Yoruba rethink,’. The money is blood money. And posterity will judge them for that action,” he said.

Continue Reading
You may also like...
Related Topics:bribe, jonathan, yoruba