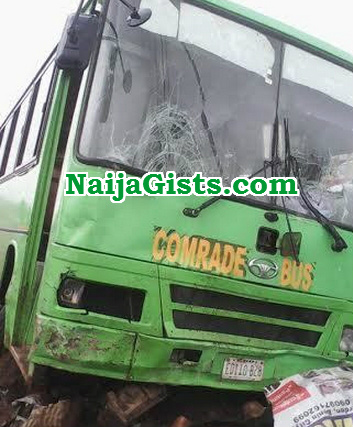 The fatal accident occurred around 12:30pm today along Sapele road in Oredo LGA of Edo State.

‎It was gathered from sources in the community that the victim and a woman, believed to be his wife, were waiting along the busy highway to board a vehicle to Warri, Delta State, when the bus with registration number ED-10-B28, veered off the road and knocked him down, severing his head in the process. 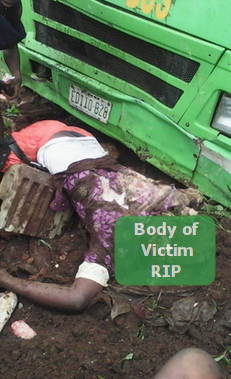 “They were waiting to board a bus to Warri when the Comrade Bus suddenly‎ hit him.
“It looks like the brake failed because of the way the bus just hit the man and removed his head. The man died instantly but the woman was lucky to jump and escape,” a source in the community told journalists.

Also confirming the sad incident on phone, the Sector Commander of the Federal Road Safety Corps, Mr. Oluwasusi Familoni, said the identity of the deceased could not be ascertained at the time of the accident.

He however said that the remains of the victim was deposited at the Stella Obasanjo Hospital.