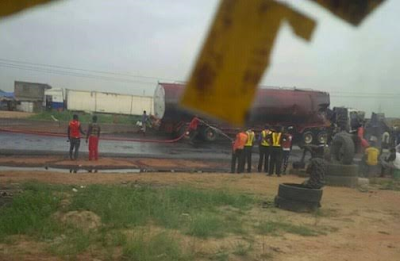 But the state command of the Federal Road Safety Corps (FRSC) said only one person died. The incident occurred at a bend on the highway.

Confirming the incident, the FRSC Public Relations Officer, Ebony State Command, Odimpa Paul confirmed that the driver of the tanker died on the spot in the accident.

He said men of the Corps had already cordoned off the incident scene, adding that the action was taken to enable the men protect lives and properties in the area and stop passers-by and witnesses from scooping the product until another vehicle comes for trans-loading.

According to him, the registration number of the tanker is: Abuja BWR 969 XC and that the tanker that fell was carrying 40,000 litres of AGO, otherwise known as diesel from Port Harcourt in Rivers State en route Makurdi, the Benue State capital.

“The tanker fell while trying to negotiate a bend along the Abakaliki-Afikpo Expressway.
“As we talk people are at the scene but the area has been cordoned off. Out of the three conductors accompanying the tanker, only one of them is unhurt while the others are in a critical condition.”