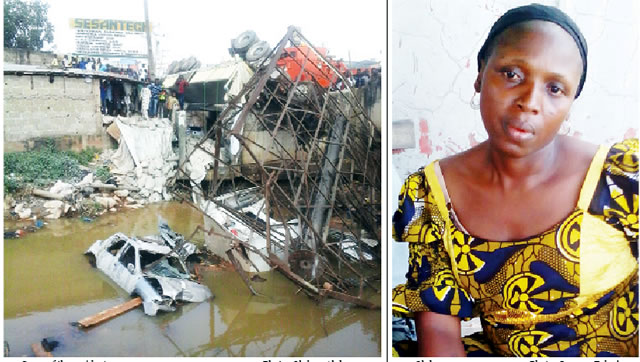 At least 20 people lost their lives in a multiple accident at the Tollgate end of the Lagos-Abeokuta Expressway, Ogun State on Wednesday.

Among the dead were a pregnant woman; a yam seller identified as Iya Nimota whose daughter would be having her wedding on Saturday; five bread sellers; two policemen and motorists.

We learnt that the policemen, from the Sango Police Division, had at about 11pm on Tuesday, stopped a bus conveying yams, and insisted on collecting N200 from the driver.

Our correspondents gathered that the trailer, from the Lafarge Cement Company, Ewekoro, conveying hundreds of cement bags, had a brake failure, and ran over the line of vehicles, pushing three of them into a canal at the junction.

While the 20 casualties had been taken to the Ota General Hospital morgue, the others were said to be in a critical condition at the state hospital.

A survivor of the accident, Lateefat Olukogun, said they had encountered 10 police checkpoints on the road and bribed the policemen at each checkpoint.

She said when they got to the Oando area of Tollgate, they met another team of policemen, who flagged down their vehicle.

She said, “All we were carrying in our truck were yams and sacks of garri. The police never allowed us to have breathing space as they kept stopping us on the road and collected N200 from us.

“I was the one paying them and I had spent everything I had. I had N100 left on me. I begged the policemen to take the money from us and allow us continue with our journey, but they insisted that we pay the N200.

“The driver then gave his boy N500 and asked him to go and look for change to give the policemen. The guy crossed to the other side of the road to look for change. Few minutes later, he returned and gave them the N200. He had barely paid the money than we heard a loud bang.”

“Iya Nimota was sitting at the back. The trailer crushed her. The driver of the bus, however, got seriously injured and he is in the hospital,” she said.

[Reported By Samson Folarin and Olaleye Aluko, Metro Plus]