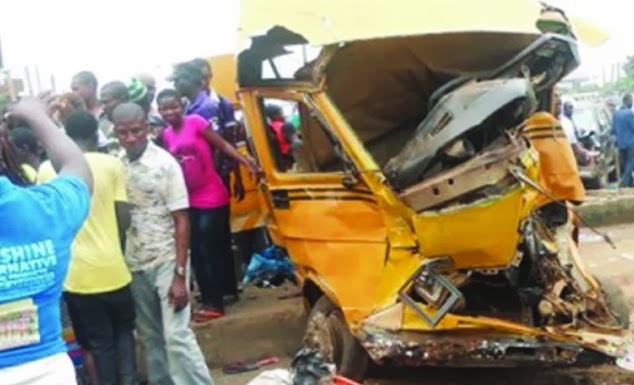 It was a very sad scene to behold today in Oshodi-Apapa road in Lagos state Nigeria.

The accident involved a bus belonging to the Lord’s Chosen Charismatic Revival Church and 4 other vehicles at the popular expressway.

A traffic warden at the Akinpelu Police Station, Oshodi who witnessed the fatal accident told reporters this morning that the truck was coming from the Anthony flyover and heading towards the church’s headquarters in Ijeshatedo when the driver lost control and hit a commuter bus loading passengers near the Charity Bus Stop.

The traffic warden said other vehicles which were on high speed rammed into the truck, leading to the death of many.

He confirmed that six persons died in the accident while many were injured. Some hawkers were said to be among the dead.

The injured, he disclosed, were rushed to nearby hospitals while the dead were taken to the mortuary.

“The accident was unfortunate. When we arrested the driver, he blamed it on brake failure but we also observed that he was carrying an overload. So it is possible that the weight of the load caused him to lose control. We are still investigating,” he stated.

He denied that 13 passengers died in the accident, saying only six persons have been confirmed dead as at 9 a.m. today. The traffic warden who said he participated in carrying the corpses to the ambulance said majority of the victims were women and children.

He told P.M.NEWS that the driver of the truck, Lawrence Nwaodu, is in custody.

Oshodi Unit Commander of the Federal Road Safety Corps, Mr. Samuel Ogundayo, said 19 people were involved in the accident, adding that eight of them died. It was learnt that among the dead was an unidentified pregnant woman, whose foetus was also crushed in the accident.

In his own account, a witness, Okwudili Ulasi said the truck after hitting the bus rammed into commuters waiting for bus.

“Many people were waiting at the motor park. The truck also rammed into some of the vehicles there. So many people were crushed and blood was all over the place,“ he narrated.

Mortuary assistants at the Ikeja General Hospital morgue said none of the dead was brought to the hospital. They confirmed that the corpses were taken to the IDH in Yaba.

Police Public Relations Officer, Ngozi Braide, said the driver, Lawrence Nwaodu, had been arrested and the vehicle had been impounded.

Braide said some of the injured were rushed to the Lagos State University Teaching Hospital, Ikeja.

Braide warned motorists, especially truck drivers, to always check their vehicles before driving on the expressway as cases of truck accidents had risen in recent times.

In a statement she signed, Braide stated: “At exactly 12 p.m., a fatal motor accident occurred at Oshodi. When police officers from Makinde Division led by the Divisional Police Officer arrived at the scene, they discovered that it was caused by a tipper, which was carrying sand, along Apapa-Oshodi Expressway, inward Mile 2 service lane. “The tipper, with number plate, JJJ 824 XD, owned by the Lord’s Chosen Church, lost control due to a brake failure and rammed into three stationary vehicles in the park. In the process, all the vehicles got damaged while five yet-to-be identified female pedestrians lost their lives.

“One of the deceased was a pregnant woman, whose foetus also gushed out, bringing the casualty figure to six in number. About five people were also injured and they are currently receiving treatment at LASUTH.

“We have apprehended the driver of the truck, whose name is Lawrence Nwaodu, 45. The four vehicles involved have been taken to LASTMA office, while calm has also returned to the area.”

This is very sad, may their souls rest in perfect peace.