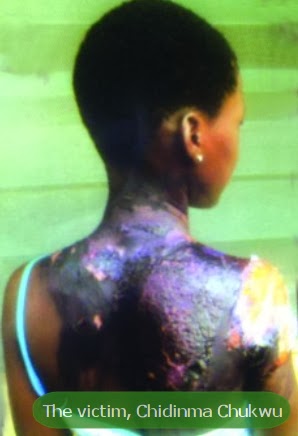 A wicked woman has been arrested in Lagos for a gruesome hot water attack on her own sister.

According to Lagos Police officials, Mrs Angela Uzoma, a 28-year-old wife of a Pastor is cooling off at Kirikiri Prison in Apapa for allegedly attacking her sister whom she brought from the village with hot water.

The teenager suffered her fate on a fateful day when she returned home without selling all the pawpaws Mrs Uzoma gave her to sell.

The 28-year old housewife who is also the women’s leader in her husband’s ministry at Shasha allegedly poured hot water on Chidinma Chukwu, causing her serious injury.

The incident happened at their home in Ifelodun St in Orisunmbare area of Shasha, Lagos.

Mr Uzoma accused 14-year-old Chindinma Chukwu of not selling all the pawpaws on the day of the attack.

According to Police investigations, Angela had warned the teenager not to come back home until all the pawpaws are sold.

Unfortunately, she did not sell everything and Angela became angry, accusing her of being too playful.

After pouring hot water on her, she tried to hide the injury instead by hiring a nurse to treat her at home but the matter came open to a good Samaritan who reported it immediately to the police. Angela was immediately arrested by the Police

In a confessional statement at the police station, Pastor Mrs Angela Uzoma said she poured the hot water on Chindinma accidentally, adding that she brought her from the village to train her and she was hawking pawpaw to assist the family to feed. “It is the devil’s work and I regret what happened. I want to settle this matter out of court,” she pleaded.

“When I heard of it, I blamed my wife and told her she went too far,” said Pastor Paul Uzoma, the husband of the accused.

Angela was arraigned yesterday but she pleaded not guilty. She was granted bail  in the sum of N50,000 with one surety in like sum.

The presiding judge has ordered her remanded in Kirikiri Prison in Apapa because she couldn’t pay her bail. Her case has been adjourned till Dec 12 for further hearing.

It’s pathetic how people blame the devil for everything.