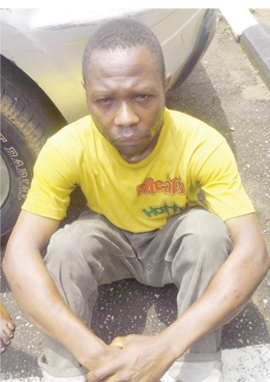 Mr. Itorobong Iyang, a 36-year-old father of three told journalists on Thursday that he was sex starved and was drunk when he defiled his 8-year-old neighbour’s daughter. Iyang, who lives on Oyo Road at Ajegunle area of Lagos, said he had been separated from his wife for a while.

The suspect and others arrested for different criminal acts were paraded yesterday at the state Police Command Headquarters, Ikeja. Iyang said he defiled the eight-year-old girl under the influence of alcohol.

“I had just taken ‘hot drink’ (alcoholic drink) and was tipsy.

So I decided to cook, when some of my neighbour’s children came over to my place to play. After they left, I went to sleep. While I was sleeping I heard the little girl’s voice calling me. So I woke and found my neighbour’s daughter in my room. I decided to play with her. While playing with her, I told her to pull off her pants and she did without hesitation. I also asked her to insert my penis into her private part; she did and started rubbing it. What surprised me the most was that she did not cry and did not say she was in pains.” Iyang said he was still in the act when the girl’s mother called out for her, when she noticed that she was not outside with her playmates. When he had the girl’s name, he pulled out and quickly dressed up and the girl left to answer her mother.

But owing to her mother’s suspicion, she asked her daughter what she was doing in Inyang’s house and the girl, out of sheer innocence, confessed to her mother what transpired. The mother then invited the police who arrested Iyang.