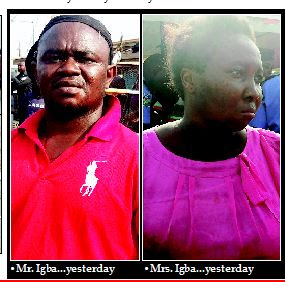 A man identified as Daniel Igba was grieving yesterday over the loss of his 19-month-old baby who was snatched from him during the violence at Mile 12 on the outskirts of Lagos.

He said: “I was in the house around 10am and I saw that the people were bringing the fight to our area (across the bridge).

“So, I hurriedly entered the house and carried my baby in an attempt to escape. But they chased me. They caught me and started beating me. They axed my head and my hand.

“I was still holding the baby. As I tried to run again, I fell and they snatched the baby from me. Since that time, we have not seen our baby. His mother was in school when it happened.”

Mr. Igba was beaten and had a knife wound on his head.

Nigerian Lady Who Stabbed Boyfriend To Death Over S*x In Lekki Lagos Faces Life
Ese Oruru Is Pregnant, She Was Raped By Yunusa Dahiru – Charles Oruru