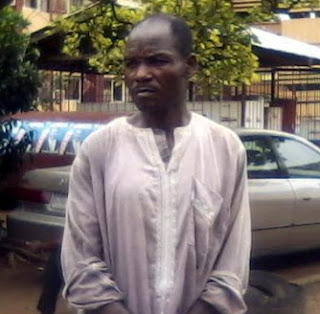 A 40-year-old painter, Yisa Aweda was today caught at his residence in Orile Area of Lagos having sexual intercourse with a two-year-old girl child (name withheld).

Adeniyi said that the crime was initially reported at Orile Police Station where the father of the victim was also reported to have hit the rapist with a broken bottle when he caught him in the act.

“On Nov. 16, the victim’s mother found Yisa Aweda having sexual intercourse with her daughter in her living room and immediately shouted for help.
“This attracted other neighbours and her husband who came in and in anger took a broken bottle to cause serious injury on the perpetrator.
“The matter was immediately reported to Orile Police station, while the perpetrator was taken to the hospital for medical attention.
“The father of the girl was also arrested and detained.
“On Nov.14, Mirabel Centre carried out a test on the victim, which confirmed a penetration but the result has been sent to the Police Station for proper prosecution.

“The matter was reported to the office of DSVRT on Nov.15. We visited the Police station to know the steps taken by the Police and we also visited the perpetrator in the hospital, ‘’ she said.