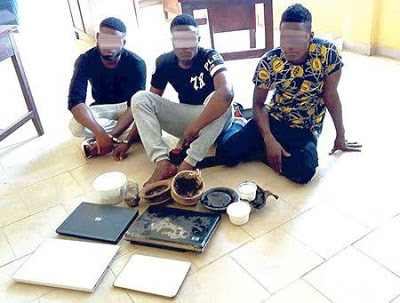 Meet Ibadan’s most wanted Yahoo Boys (Internet fraudsters) who relocated to Soka area of Ibadan after they were declared wanted in Bodija area of Ibadan have been caught.

The suspects told police they hypnotise their victims, commanding them to release their dollars and valuable properties using powerful charms.

The notorious fraudsters were picked up from different areas of Soka around 6:30am on Wednesday by Oyo State Police Anti-Kidnapping Squad.

Items recovered from them included 4 laptops and assorted charms.