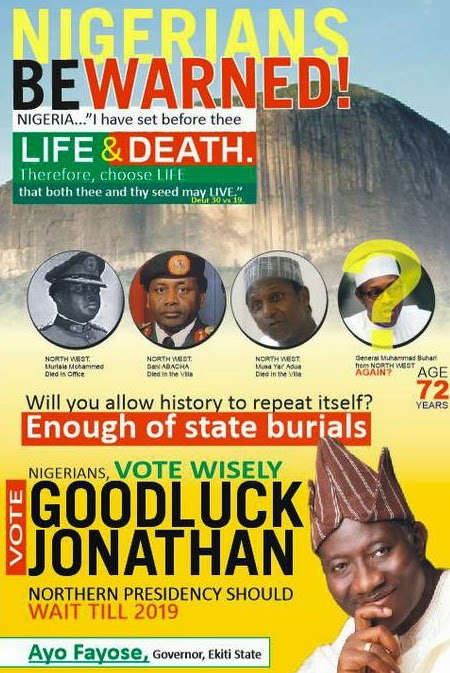 A man by the name of Oliah (last name withheld) wrote NaijaGists.com an eyeopening piece on Saturday afternoon but we just got a confirmation from him this afternoon.

Infact the email is too much to digest.

The guy claimed he’s the son of a powerful spiritualist based in Awka who died on the 16th of December of natural causes.

He said before his father died, he sent him on a mission to meet Anambra Governor Willie Obiano to expose PDP secret plot to kill Buhari to him but on getting here, he was not allowed to see him claiming that Obiano has nothing to do with PDP nor APC.

Oliah said 2015 election will be won by PDP because days to the election, they will likely kill Buhari if APC didn’t go spiritual. Oliah said APC Presidential aspirant Buhari needs to seek the help of powerful spiritualist in order to escape the death arrow being shot at him from the opposition party.

Mr Oliah said Fayose’s death advert is a direction given from the occult world that will precede Buhari’s death.

He also gave an hint on how Jonathan’s mother has been ruling Nigeria using witchcraft but didn’t speak further.

NaijaGists.com sent a reporter to Awka yesterday. He will furnish us with further details of the interview this afternoon. Stay tuned, we will share the content of the explosive interview with you later today or tomorrow.

It is not a coincidence that Witches and Wizards association of Nigeria has endorsed Jonathan again for the 3rd time since he took office.

God please save Nigeria from all evil men.