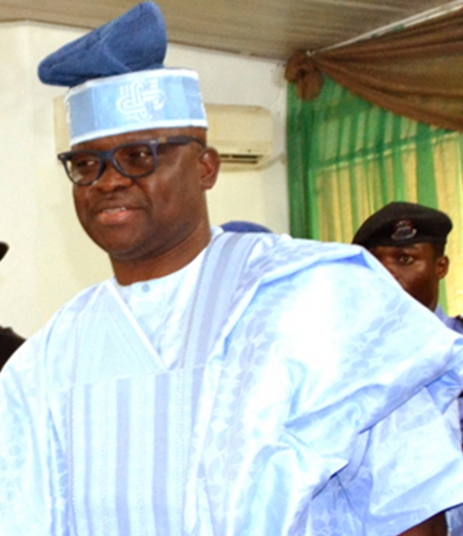 Ekiti Governor Ayo Fayose today told President Muhammadu Buhari that he as a person is not afraid of him.

Fayose said Peace Committee leader General Abdulsalami warned Buhari to mind his body language and be mindful of the fact that he’s not heading a military government.

“opposition is one of the roots on which democracy stands and any President or Governor that does not want opposition will eventually become a dictator.
“I want to state without fear or favour that I will continue to speak the truth no matter whose ox is gored.

“Nigeria belongs to all of us and no one can intimidate me or the good people of Ekiti State who freely and overwhelmingly gave me their mandate.
“Democracy as a form of government thrives on our ability to ask questions and get answers from leaders,”.“These are Nigerians who don’t need personal favours from the President and he should get the message very clearly that he is being told not to act as a dictator.”

“rather than concentrate and make a difference within his 100 days in office, the president’s greatest achievement so far is harassment of PDP leaders, appointment of his in-law and kinsmen into sensitive positions, selective fight against corruption and arrest and detention of INEC officials who worked in States won by the Peoples Democratic Party (PDP).”

“fighting corruption should not be synonymous with convicting Nigerians on pages of newspapers. Rather, the judiciary and other relevant agencies should be allowed to do their jobs without any direct or indirect interference from the President and his party.
“Corruption must be fought in accordance with the laws of the land because going against the laws of the land and the oath taken by the President to respect the constitution in itself is corruption.”

Isn’t this the man that wants Buhari dead during the heated political campaign.? Buhariphobia is in the air…..#wahala dey

Continue Reading
You may also like...
Related Topics:Buhari, dictator, fayose