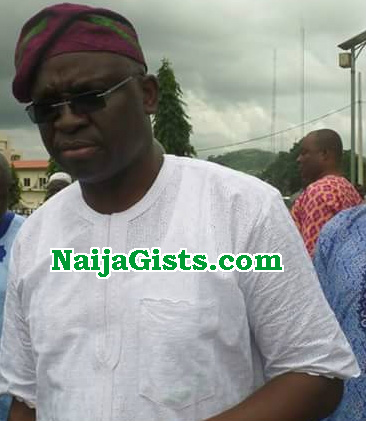 Hear what a top official at the EFCC said on Friday about Ekiti State Governor Ayodele Fayose’s involvement in the ongoing money laundering investigation.

“The governor is just grandstanding because of the immunity he enjoys. He personally admitted collecting money from Zenith Bank as a campaign gift. His associate, Agbele, reeled out how houses were bought from the N1.299billion brought by Obanikoro. And the ex-Minister has finally nailed him with his statement on oath.

“Fayose has a date with the court. It is just a matter of time. In two years, he will be in the dock to account for the contracts he executed in the ONSA to have earned such slush funds.”

The EFCC had discovered that Sylvan Mcnamara Limited, allegedly owned by Obanikoro and his sons, was used to launder the N4.745billion.

Obanikoro told crack detectives of the Economic and Financial Crimes Commission (EFCC) that N3.880billion was allocated to Governor Ayodele Fayose and Senator Iyiola Omisore out of the said cash.

He also said he handed over $5.377m (N60m then) cash to Fayose at Spotless Hotel, Ado-Ekiti in the presence of the former Secretary of the Peoples Democratic Party in the state, Dr. Tope Aluko, and other party stalwarts.

Continue Reading
You may also like...
Related Topics:efcc, fayose, obanikoro