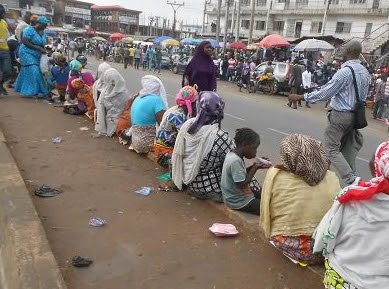 The officials of Lagos State Police Command have rescued 11 children used for street begging by a church in Ikorodu, Lagos State. As a result, a female evangelist with the church has been arrested and is being interrogated at the police headquarters, Ikeja .

The Commissioner of Police, Mr Fatai Owoseni who paraded the suspects yesterday said the lid was blown off when two of the under aged children were seen begging for arms.

Owoseni said detectives after interviewing the children, stormed the church premises where others were rescued and one Lois Antinso was arrested. The CP said the church was being investigated to know its involvement in using the children for slavery.

“I am attached to the church. I am an Evangelist in the church. We run an orphanage/less privileged home at Agbede road, Ikorodu. We care for the poor, needy, orphan, widow, destitute and abandoned. All support funds are paid to the church’s account.

“I was shocked when the Bishop of the church came to the police to deny me. We go out three times, a month to beg for assistance. It is not as if I leave the children to go on their own. I am saying that the children are too small to speak. The police interrogated them and they started talking as if I allow them to go alone. The day I was arrested I was taking two of the children, nine and 10 to the bank to teach them how to use ATM. It was not as if I took them out for begging”

One of the children, Nnoso said

“We were begging when the police picked us. We used to go for begging three times a week. People used to give us alms, food items, clothes, shoes and money. We used to hand over the things to Aunty.

9 Kidnappers Terrorizing Residents Of GRA Phase 2 In PH Arrested After Abducting Ransom Bearers
Chika Ike: I’m Looking Forward To Getting Married To My Fiance, He Is So Special To Me