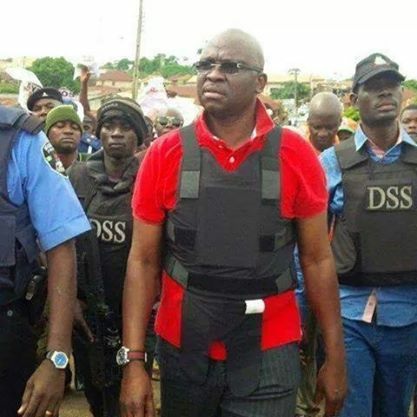 The All Progressives Congress in Ekiti State has accused Governor Ayodele Fayose of awarding N720m to himself as the arrears of salaries and allowances of his unfinished first term.

The governor was impeached on October 16, 2006 by the then Ekiti State House of Assembly.

But the Supreme Court in a recent judgment said the impeachment was null and void because due process was not followed.

The state APC Publicity Secretary, Taiwo Olatubosun, in a statement on Thursday, said it was “selfish and callous” for the governor to pay himself arrears for his unfinished term when he had yet to pay workers and pensioners in the state.

The party said it was equally “shameful and heartless” for the governor to refuse to pay statutory pensions to Ekiti retirees after serving the state meritoriously.

The party also accused the governor of refusing to pay traditional rulers for five months while also refusing to pay gratuity to retired workers since he assumed office.

The APC said, “Though he admitted he owes only May salary as if he has any excuse to owe Ekiti workers for one day, as we write, over 10,000 Ekiti workers have yet to receive their April salaries. This is because not all workers he claimed to have paid have actually received their salaries.

“What he has been doing is to pay 10 out of 300 workers in a ministry and then go to town with his propaganda that he has fully paid workers.

“Only last week, he electronically paid N13m into the accounts of each of the 16 local governments and collected the cash back from the council chairmen for purported joint projects like he did in his fraudulent poultry project in 2004.

“We are asking Fayose once again what he is doing with all the monies he saved from the empowerment programmes he cancelled. We also want to know where the election contract deductions of N650m monthly are going. Who are the beneficiaries? Are they more important than Ekiti workers?”