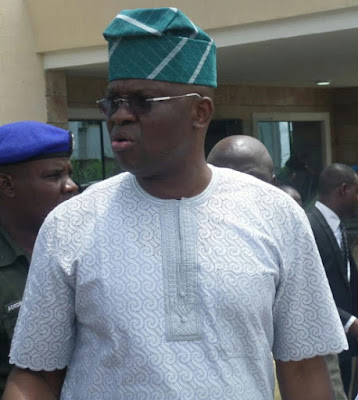 Yesterday, Mr. Ayo Fayose, the governor of Ekiti state attempted to pre-empt the EFCC over the illegal acquisition of properties bought with stolen funds from the coffers of a state that has not been able to pay workers’ salaries for over six months. As soon as he got information that some his detained agents had confessed that they assisted him to buy properties in Lagos and Abuja he issued a statement to the effect that he owns the properties legitimately. How legitimate?

Not knowing that his agents and contractors had admitted that he stole Ekiti state funds to purchase the properties Mr. Fayose claimed that he bought them from the “campaign fund’ donated to him by zenith bank plc and some unnamed friends. But the efcc has since confirmed how Ekiti people were duped by the lousy governor.

This guy must be so confused that he does not appreciate the legal implications of his stupid outbursts. The more he talks the more he implicates himself. Whether the N1.2 billion was stolen from the office of the NSA, Colonel Sambo Dasuki through Mr. Obanikoro or donated by zenith bank plc the efcc has the power to recover the criminally diverted fund. Granted that zenith bank plc donated the fund does the financial institution have the power to remove depositors’ fund and donate it to Mr. Fayose for his political campaign? Can a bank contribute N1.2 billion to a political campaign of a politician?

Has Mike Ozekhome SAN forgotten to educate his client whose confessional statements are sufficient to convict him in a court of law. Is Ozekhome not aware that the maximum amount stipulate for political expenses of a governorship candidate is N200 million whereas his client has admitted that he spent N1.2 billion? Has Ozekhome not made it clear to his client that the N1.2 billion is forfeitable since it was either stolen from the office of the NSA or from the vault of a bank being depositors’ fund?

However, the efcc must be commended for carrying out a professional investigation which is so thorough that the explanations of the suspect, Mr. Fayose, look so unintelligent. Surely, Mr. Fayose stands to forfeit all the properties and other assets traced to the campaign fund of N1.2 billion, whether stolen from the government of Nigeria or donated illegally by zenith bank plc. But since the efcc has shown that the money for the properties was stolen from the account of Ekiti state government through contractors, what is the explanation of Mr. stomach infrastructure?

Mr. Fayose claimed that the N1.2 billion traced to him was donated by zenith bank and unnamed friends. He said that he spent the entire fund on his election. Now, the efcc has found and confirmed that he bought properties worth N1.35 billion within 6 months of his inauguration. Will Mr. Fayose or his lawyer, Mr. Ozekhome add up the figures for the members of the public?