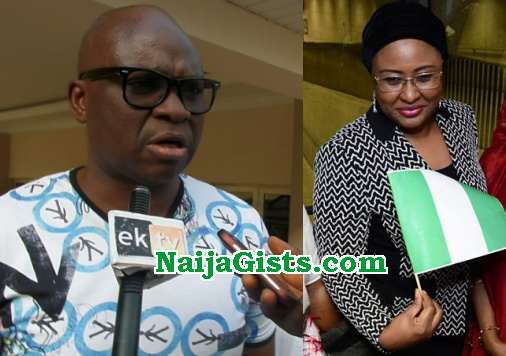 August 4, 2016 – Fayose ‘Slapped’ For Saying Aisha Buhari Will Be Arrested In The US, Nigerian Blasts Him In Open Letter

Contrary to Fayose’s cover up claim that Nigeria’s First Lady Aisha Buhari would be arrested if she ever steps on US soil, the First Lady is now roaming about with honour in the United States of America.

Aisha Buhari arrived Washington DC yesterday to a cheering crowd of Nigerians who came to honour her.

My heart saddens by the news that the wife of the president, Aisha Buhari has travelled to the United States on a visit. I read somewhere that “she is expected during her visit to attend meetings at the George Mason University in Fairfax, Virginia. She will also be hosted by the United States Institute of Peace, in collaboration with Voice of America, and attend the 25th Anniversary celebration of Zumunta Association USA Inc.”

Her visit to the US wouldn’t have made news sir but for your challenge to her to visit the place and risk being arrested by the FBI. Let me refresh your brain sir as you might have forgotten considering you have a lot of governorship duties on your mind specifically the stomach infrastructure project you so love to carry out.

Sir, Do you remember when the EFCC froze your account following allegation that you received money from Sambo Dasuki to fund and rig your election? Do you remember that instead of denying the allegation, the first thing you said was that President Buhari cannot claim to be clean too as his wife Aisha is mentioned in the Halliburton scandal? Even after she called you a mad dog and asked you to withdraw the statement, you still insisted that she was wanted in the US and dared her to set foot in the country.

Do you recall you said the FBI would be waiting at the airport to arrest her if she dared visit the US? Alas, there are pictures circulating around the internet sir showing the first lady in the US for a trip. What are you going to say now? Are you going to say she travelled to the US using a diplomatic passport and thus couldn’t have been arrested? If you say that sir, some people will remind you that Senator Buruji Kashamau even with a diplomatic passport would not make the mistake of entering the US. That argument will be considered faulty.

Are you going to say the photos being displayed are photo shopped and doesn’t look like the US? Maybe she is hiding in London and lieing that she is in the US. Are you going to point out that no white person has been seen in any of the pictures unlike your own photos that showed you giving a lecture to Chinese investors? Although some people pointed out that your photos were an attempt to take Nigerians for a ride as you were at a train terminal but at least white people were seen. Why are no white persons seen in Aisha Buhari’s US photos?

Governor Fayose, you might want to say that why has she not taken a picture with Barack Obama like Toyin Saraki did when she went to the US? That point may seem lame as some would point out that she just arrived and why would she want to see the US president if she has no business with him? Sir, you might even use this opportunity to lash the first lady for using Nigeria’s money to travel around instead of staying in Aso Rock to cook for her husband. Your excellency, you are known as a man who doesn’t go down easily.

You can do a fact-finding check on how much she spent on the trip and how the money could have been used to benefit ordinary Nigerians like you do in your stomach infrastructure roject. Sir, remember she has charged you to court for failing to withdraw your allegation and even though your immunity as a governor protects you from frivolous court charges, it expires in 2018 and by then Aisha will be in a position to deal with you. Sir, do you remember Nuhu Ribadu and Ibrahim Lamorde who have served as Chairmen of the EFCC in the past countered your claim that the Aisha Buhari mentioned in the scandal is not the current first lady but you turned a deaf ear and insisted the two were one?

Is it not looking more likely that you are wrong all along and have either deliberately liked or ignorant? If it is the first one, I beg you to stop it as it is a useless way to defend the allegations EFCC has against you.

How will lying that Aisha Buhari is a wanted felon in the US save you from your own crime? If you said it out of Ignorance, I would suggest that you behave like a man and swallow your pride sir. If you go to Aso Rock in the dead of the night and say you are sorry, nobody will know and you’ll be forgiven.

Continue Reading
You may also like...
Related Topics:aisha buhari, fayose, us, visit