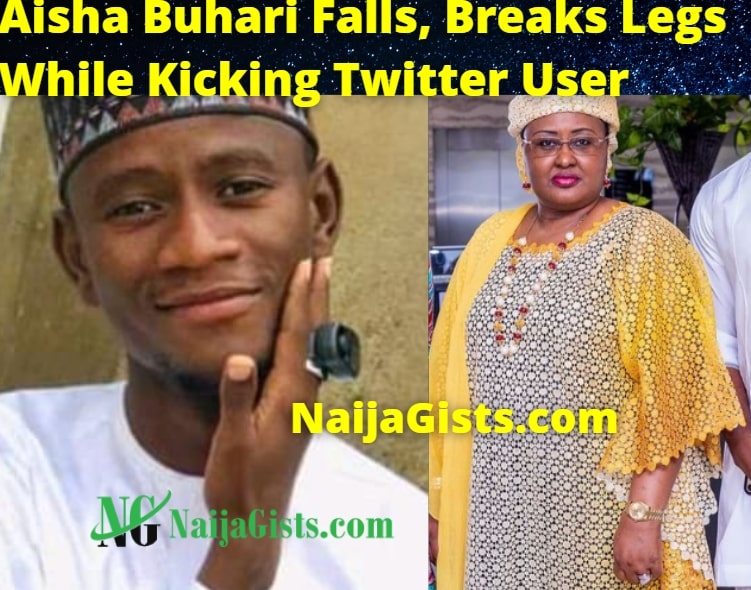 The wife of the President of the Federal Republic of Nigeria, Aisha Buhari has been rushed to the hospital.

According to insiders in Abuja, Aisha Buhari was rushed to the hospital last week, November 21 precisely when she slipped and broke her leg while attempting to kick a University student arrested for complaining about her on Twitter.

This update was published by the Daily Nigerian publisher, Jaafar who indicated that Aisha Buhari ordered the arrest of a final year student, Aminu Adamu Muhammed and another lady , Zainab Kassim.

The victim of Aisha Buhari’s attack was arrested following a Twitter post. He’s a final year student of the Federal University, Dutse.

Here is how Daily Nigerian reported the case:

“From my findings, it was not SSS but plain-clothed policemen who arrested & tortured a final-year student @aminullahie and another lady named Zainab Kassim (a former social media aide to First Lady). The operation was engineered and executed by Aisha Buhari’s ADC Usman Shugaba.

“It may sound like a fairy tale, but the following is actually what transpired: the duo were beaten to a pulp in the presence of Mrs Buhari by three security aides. While Aminu and Ms Kassim were being beaten, the First Lady felt that they were not beating them well, so she joined them.

“As she attempted to throw a kick, she slipped and fractured her leg. It was the injury she suffered during the assault that took her to Cedar Crest Hospital for treatment.

“While Ms Kassim was released on the condition that she would not speak to the press, the final-year student may face trumped up charges of defamation. This is sad for democracy.”