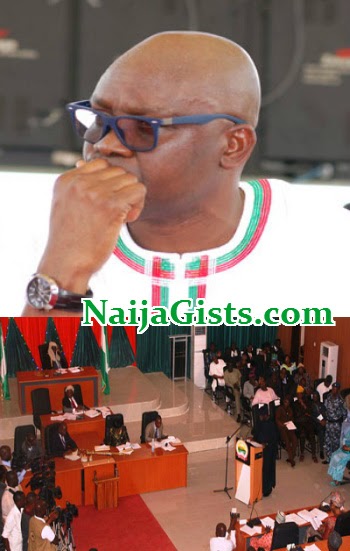 A Federal High Court in Abuja has again turned down the prayers by Governor Ayodele Fayose of Ekiti State to stop the impeachment proceedings initiated against him and his Deputy, Kolapo Olusola.

Fayose and Kolapo had on April 8 approached the Federal High Court in Abuja with an exparte motion for an order to stop Ekiti House of Assembly Speaker, Adewale Omirin, and other All Progressives Congress (APC) lawmakers, from their plots to impeach the governor and his deputy.

At the resumed hearing yesterday, Justice Ahmed Mohammed refused an oral application made by Fayose’s counsel, Ahmed Raji (SAN), for a specific interim order of status quo that would bind all the parties in dispute.

The oral application was moved in view of the fact that lives had been lost amid tension, even though the matter was subjudice.

Raji also complained that attempts were being made by the lawmakers to use primary school site for impeachment.

The judge said the court needed not to make further order since the defendants were within time allowed by the rules of court to show cause why the restraining orders sought against them by the plaintiffs should not be granted.

Justice Mohammed had earlier in his ruling held that Omirin, who was represented by Terence Vembe, was within the three days allowed by the rules to show cause as he was deemed to have been served on Saturday, April 11.

Vembe argued that the service through a publication in Tribune newspaper of Saturday, April 11, the day governorship and House of Assembly elections held nationwide and as a result of which movements were restricted across the federation, was incompetent.

But the judge in the second ruling agreed with Vembe that the day the order was published was a public holiday and “the publication ought not to have been done on that day.”

He then ruled that the three days should begin to run from Tuesday, April 14 to Friday, April 17.

“As of today, the 1st defendant is still within time as provided by Order 36 Rule 13 of the Federal High Court Rules,” the court held.