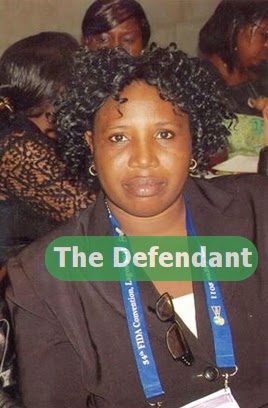 An overzealous lawyer has been arrested following an assault on her colleague within the court premises.

The attack which happened last week Tuesday, November 18, 2014 at Igbosere Magistrate Court during a struggle for a high profile client has put Nina into trouble.

59-year-old Barrister Lawani was arraigned today and handed a one court charge of Felony and unlawful assault for attacking her colleague, Barrister Helen Ibeji (pictured above).

Police prosecutor, Sgt. Daniel Ighodalo told the court that the complainant reported to the police that her colleague slapped her on the right side of her face in public at the Igbosere Magistrates’ court premises when she tried to prevent her from snatching her client.

Ighodalo said the offence committed by the accused is punishable under section 170 of the criminal laws of Lagos State.2014.

Nina Lawani pleaded not guilty to the crime. The case has been put over till December 18, 2014 for hearing.

So lawyers too are breaking the law… nawao.