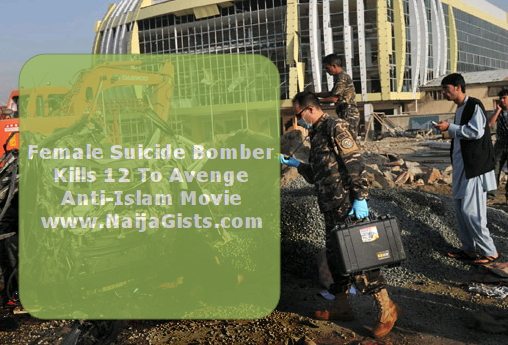 A female suicide bomber killed 12 people in Kabul on Tuesday in the deadliest single attack claimed to avenge a US film that has sparked a week of deadly protests across the Muslim world. naijagists.com

The attack brings to more than 30 the number of people now killed in a violent backlash over a YouTube trailer for the film, “Innocence of Muslims”, believed to have been produced by a small group of extremist Christians.

Security officials said nine foreigners were among those killed on a major highway leading to Kabul airport and close to a wedding hall when the bomber blew her station wagon up alongside a minivan carrying foreign workers.

An AFP photographer saw at least six bodies lying among the wreckage of a gutted minivan, and another vehicle destroyed by flames still burning in the middle of the highway, with debris flung all around.

Hezb-i-Islami, the second largest insurgent group after the Taliban who have been fighting US-led troops and the government for 10 years, claimed the attack.

“The bombing was carried out by a woman named Fatima. The bombing was in retaliation for the insult to our Prophet,” spokesman Zubair Sidiqi told AFP in a telephone from an undisclosed location.

A week of furious protests outside US embassies and other American symbols in at least 20 countries have killed 19 other people, including the American ambassador to Libya and three other US diplomats in the North African country.(PM)