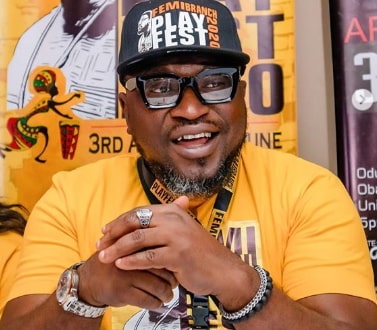 Nollywood actor Femi Branch is set to celebrate his 50th birthday in style.

As part of activities lined up for the event, the actor has launched an annual play festival tagged Femi Branch Playfest.

The maiden edition of the festival holds from May 25 to May 31, at the MUSON Center, Onikan, Lagos and will feature five of his plays – Po! , Shalanga, Jungle Justice Ankara Committee and Kunme The Musical – to be performed by selected troupes.

Also, from April 3, to June 21, Branch will tour 10 cities with Kunme The Musical and Festival Play’. The cities are Ife, Akure, Ado Ekiti, Ibadan and Abeokuta. Other cities the play would berth include Ijebu Ode, Ikorodu, Badagry, Benin and Abuja.

The playwright who will clock 50 on May 14 said that the play which is named after his mum extols the qualities of Queen Esther in the Holy Bible.

Speaking on the play, he said:

“I found out there was a lot of things that happened that were not written in the biblical account. There was so much humour in that story. And the story is adapted to a Nigerian setting.

We’re looking at women empowerment and empowerment of the girl child because that is the story of Esther.

This was the story of a young girl that took on the burden of an entire nation and she laid her life on the line. It goes to celebrate the strength of our womenfolk as well. It goes to show the sacrifice that women make on a daily.”

Branch disclosed that aside from celebrating his birthday, the festival “is a mentorship program to develop and nurture young acting talents selected from the Obafemi Awolowo University, Ile Ife through the Femi Branch Master Class.”

He also said that ‘Kunme The Musical’ will be performed by the students selected after an audition for actors, singers, dancers and musicians slated for February 25 at the Dramatic Arts department of the Obafemi Awolowo University, Ile Ife. “You’ll be amazed at the potentials of student actors. And you know, the passion is still very strong. So, they give their all,” he said.

According to Branch the 50 plus man cast Kunme is “his biggest play yet.”

On the festival, Branch said it his intention to leave a mark to inspire others.

“We’re hoping to do this every year. I have enough unpublished plays. What I’m thinking of from this point now is legacy.

So, it is primarily about Femi Branch plays.

Now, I talk about mentoring the young ones. I’m not just mentoring them as actors but also as playwrights as well. So, there’s a possibility that I might have any of my mentees that also happen to write a play, I can feature his play in my festival,” he said.