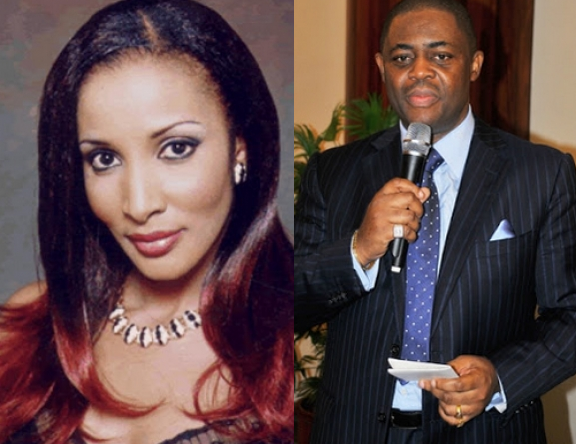 A new twist is starting to develop to a hot romance war between Senior Advocate of Nigeria Chief Femi Fani Kayode and his ex-girlfriend, Bianca Ojukwu.

Few weeks ago, FFK burst the bubble on their past romance when he openly revealed a story claiming he had an intimate affairs with the wife of the late military leader.

The daughter of the former Governor of Oyo State, Kemi Omololu Olunloyo said Bianca Ojukwu’s claims that she never dated FFK is false because she witnessed them in the 1980s in London.

Hear Kemi in her own words below;

“In the early 80′s there were a group of now affluent Nigerians that flocked together as teens in London, Oxford, Cambridge in the UK and even Wales.

“The Folawiyos, Adenirans, Lawrence twins, Olunloyo sisters and more as well as the Fani Kayode’s were all known.

“Everyone knows about Femi and Governor Onoh’s daughter. I’m a daughter of a governor too and we all know each other,” Ms. Omololu-Olunloyo added.

Mrs. Ojukwu is the daughter of the late C.C Onoh, a Second Republic Governor of the old Anambra State.

“I’ve seen Bianca Onoh at numerous social events with Femi and even Femi’s apartments in London, UK and these two almost got married!!! Whatever teen to young adults do in a relationship, namely sex, dating, kissing etc, Femi and Bianca did too,” she added.

Kemi spoke up as Fani Kayode became angry over Bianca Ojukwu’s denial of their past relationship on Monday Sept 9, 2013.

The former aviation minister who insisted he had a relationship with Bianca Ojukwu expressed his willingness to face any legal battle.

On her personal blog, Ms. Omololu-Olunloyo, 48, wrote that Mr. Fani-Kayode almost married Mrs. Ojukwu when she was 18/19.

“There are many people that know this but they may not want to get involved now because they are prominent Nigerians who don’t need to be getting into this dirt,” she wrote.

Though she admitted, in her statement made available to newsmen that she had not been with the duo during their “intimate moments,” Ms. Omololu-Olunloyo maintained that it would be “immature” to say both persons never met.

“Femi does not like fighting women in public domains be it in person or online, in fact he fights for women and once took my back in a situation where a male demeaned me with lies,” she said.

“Femi is a faithful husband and a damn good father to his children. I wrote two open letters to Bianca on my Facebook page/Madam Governor and I certainly hope she drops these meaningless lawsuits as I am prepared to be called as a witness in such a case,” Kemi added.

So why is Bianca Ojukwu denying her relationship with Femi Fani Kayode.

Is she ashamed to have dated a man of his caliber?