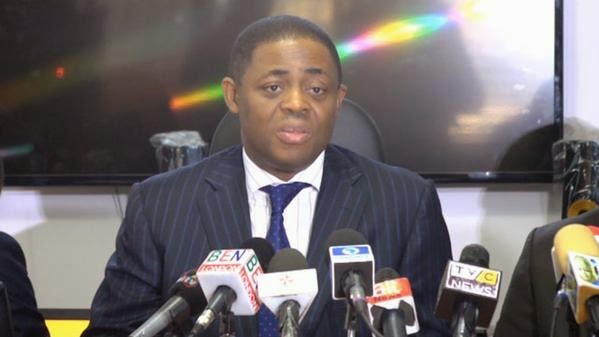 At last Femi Fani Kayode has come out of hiding. The ex-Aviation minister who threw caution to the wind throughout the course of the last Presidential campaign spoke up for the first time this morning since Buhari was declared winner.

FFK admitted that though his party was defeated, they fought a very aggressive fight to return Jonathan to Aso rock.

“We fought a virile, strong, aggressive and very effective campaign on behalf of our candidate, President Goodluck Jonathan and we put the case to the Nigerian people as to why we believe that he ought to have been elected as President for a second term.
It has however come to a point that we must tell the world and the Nigerian people about how we feel about the outcome of the election.

What we will say here today is basically to reiterate and to reflect the words of our leader and President, President Goodluck Jonathan. We start by saying that we commend and we congratulate General Muammadu Buhari for winning this election. We also wish to commend our President, President Goodluck Jonathan,for having the courage to concede that he has lost the election at the earliest moment and also for being able to stand up and rise above party politics and being able to speak like a statesman.

“Having lost, it does not mean that it is the end to the world, it just means that we need to re-group, re-organise ourselves and begin the process all over again because another elections will come in a few years time. And that is where we are today. We have conceded that we have lost. We acknowledge the fact that we fought a good fight. We do not have any fears about the future. We did the right thing during the campaign. We have no regrets about our candidate or the way in which we conducted our campaign and we will live to fight another day

Let me commend all our colleagues on the other side for also standing up for what they believed in. There was absolutely nothing personal as regards this Directorate or myself. I had nothing personal against anybody. I was simply doing my job for which I have no regrets and I wish them well and I sincerely hope that they will take Nigeria to a level that we can all be proud of.

May God grant each and everyone of us peace. May He watch over our nation. May He guide our President for the next two months whilst he is still in power and thereafter and may He guide and lead the President-elect, General Muhammadu Buhari, in the herculean task that lies ahead for him. My prayer is that he brings our nation together, heals the wounds and that he builds the bridges in terms of religion, ethnicity and region that he needs to build in order for us to make Nigeria a better place and to ensure that Nigeria becomes a great country that she is destined to be.”

You have smell Aso rock but u no go enter there because your ‘enu nla’ has put you in trouble with your elders.

It is alright Uncle K, don’t take yourself too hard, life goes on.