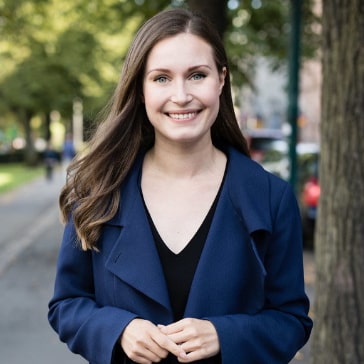 Marin took office in Helsinki today as the head of a five-party, centre-left coalition alongside four other parties all headed by women – three of whom are in their early 30s.

The 200-seat Eduskunta parliament approved Ms Marin in a 99-70 vote. The government has a comfortable majority of 117 seats.

Marin’s new finance minister, Katri Kulmuni, is even younger at 32, and only one of her coalition partners is over 35.

Marin had previously served as the minister for transport and communication since June this year.

The previous youngest world state leader was Oleksiy Honcharuk, the current prime minister of Ukraine, who was appointed at the age of 35 by comedian-turned-president Volodymyr Zelensky in August.

Despite making global headlines Marin today deflected questions about the international attention she has received over becoming the world’s youngest premier.

She told reporters outside parliament:

“My own thoughts have been on practical things and this week, I haven’t followed what the press have been writing very much either at home or abroad.”

Earlier this week she said:

“I have never thought about my age or gender, I think of the reasons I got into politics and those things for which we have won the trust of the electorate.”

Marin grew up looked after by her mother and her mother’s girlfriend, and said that her ‘rainbow family’ showed her the importance of ‘equality, fairness and human rights’.

In a 2015 interview, Marin said she felt ‘invisible’ as a child, because she could not speak openly about her family setup.

She has also said that her childhood has strongly influenced her political priorities, which include protecting Finland’s generous welfare system and low levels of inequality.

“I come from a poor family and would not have been able to succeed and move forward were it not for the strong welfare state and the Finnish education system,” she told Helsingin Sanomat.

The Social Democrats took office in June after defeating the far-right, anti-immigration Finns Party by the narrowest of margins in April’s general election.

The victory was seen by some commentators as a triumph for Finland’s liberal, equal society over a party that ran on a ticket of cutting asylum levels almost to zero and halting anti-climate change measures.

Speaking after Tuesday’s parliamentary vote, Marin pledged to rebuild trust in her party.

“We have promised the Finnish people change and now we must deliver on that promise. In June we agreed a government programme together and I believe it is through actions that we will best restore people’s trust,” she said.