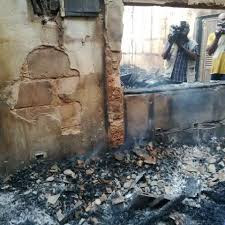 A building belonging to the Christ Apostolic Church Mission house at Isiohor, Ovia North East local government area of Edo State, has been razed by a fire whose cause has not been ascertained.

Fire fighters and sympathizers prevented the fire from spreading to the main church headquarters located within the premises.

The burnt building is used as offices, conference centre and skill acquisition unit.

The Provincial Pastor of the church, Frank Osadolor, said they were amazed at the cause of the fire.

He said the fire overwhelmed the members as they tried to put it off.