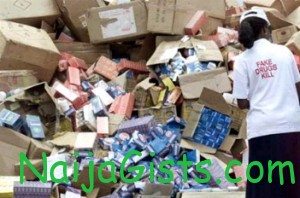 On Friday the 21st of December, 2012 fire destroyed fake drug products in the storage center of NAFDAC (Nigeria’s National Agency for Food, Drug Administration and Control) In Lagos State. naijagists.com

The office is located at 3/5 Oshodi Expressway in Oshodi, Lagos.

According NAFDAC’s spokesman, Abubakar Jimoh, the fire started at 7pm in the storage center where the bogus drug products are stored.

“The fire accident occurred in the storage facility where all the seized fake drugs are kept,’’ Abubakar Jimoh said.

He further said the mystery fire appeared to have been the result of a power surge problem as was the situation in previous fire episodes.

“As I speak with you we are trying to overhaul the entire electrical system in the office,’’ Jimoh said.