Posted on December 23, 2015 by Naija Gists Leave a comment 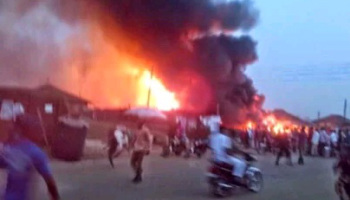 At least 10 people escaped death by a whisker today in Akure, the capital of Ondo State while two tankers dropping fuel in a filling station exploded.

Here is how National Mirror reported the explosion:

Those who escaped death in the fire incident included the drivers of the two trucks, their assistants and the workers at the filling station.

The incident which caught the workers unaware started around 2.30pm when the tanker drivers were dropping fuel in the dump at the station.

One of the workers in the filling station said that the drivers and the assistants were dropping fuel into the fuel dump when the tankers burst into flame.