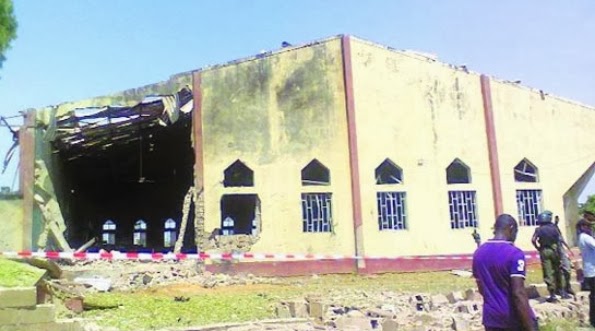 3 members of a popular church in Ibadan, Oyo state were burnt to death on Monday when a fire outbreak destroyed the church.

The church in question is Mercyland Prayer Ministries at Idi Aro.

4 people including a pregnant lady who escaped the fire reported the case to the police.

When reporters visited the scene, the bodies of the victims which included a woman, were seen inside the church premises .The inferno, it was gathered, started at about 1.45am and lasted about three hours during which property which included two generating sets, two complete drum sets, ceiling fans, many sewing machines as well as plastic and wooden chairs were destroyed.

According to residents of the area, the situation was probably worsened by power generating sets that were filled with petrol.

One of the survivors, Mrs. Oyediran, a pregnant woman, said that a young man, she simply referred to as Demola, pulled her out while she was struggling to escape.

The other worshippers, she said, were asleep when the fire started. As at the time of filing this report, the three corpses were yet to be evacuated from the church, and it was gathered that the pastor of the church, and Demola who rescued the pregnant woman, were being interrogated by the police.

One of the deceased , it was gathered was a 92-year old man, whose son refused to speak on the incident but merely stated that he interested in retrieving the corpse of his father.