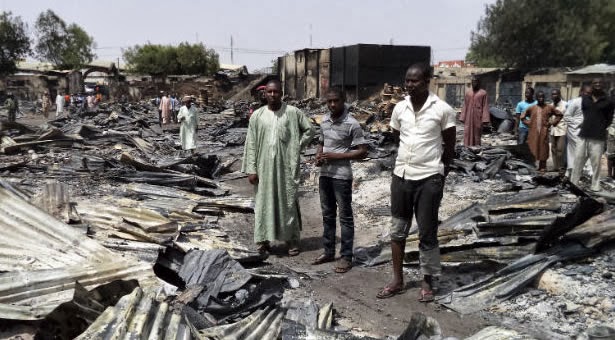 In a fresh attack on Fota village located in Gombi LGA of Adamawa state, some suspected Boko Haram militants attacked a court, police station, a primary school and 3 churches killing 7 police officers in a gun battle.

It was gathered that the insurgents attacked the area on Saturday at about 9 pm, shooting sporadically from various directions, during which three villagers were killed. They were said to have operated for several hours unchallenged.

An eyewitness said: “When they arrived Fota at about 9pm on Saturday, they headed straight to the police sation and set it ablaze. Thereafter they torched the Area Court building and a block of classrooms at Fota Primary School.”

The source suspected that the invaders were those chased from Sambista forest in Borno State by the military,

“They must be members of the dreaded Boko Haram sect fleeing from Sambista forest as a result of the military operations recently,” he explained.

According to him, the fleeing insurgents had also attacked a wedding ceremony in a nearby village of Bisir and during a shooting spree, killed three residents.

The source, who said the incident occurred in the night, told Daily Sun that the suspected sect members in their dozens, opened fire on the policemen in a local police station in the town, killing seven policemen, attacked three churches, a pastor’s house, store and later razed down a local court.

“It was in the night hours, while we were busy at a wedding ceremony , at about 10pm, the gunmen suspected to be members of Boko Haram struck. They first attacked the police station killing seven policemen instantly, including a Mobile policemen deployed to the area,” he said.

“They later set ablaze a court and three big churches .Not only that, they looted and burnt down a church’s food store.The gunmen drove in dozens on bikes and other vehicles , chanting ‘Allahu Akbar,’ many times before fleeing.”

Sources also indicated that the policemen that were killed had earlier engaged the attackers in a gun duel that lasted almost 30 minutes.