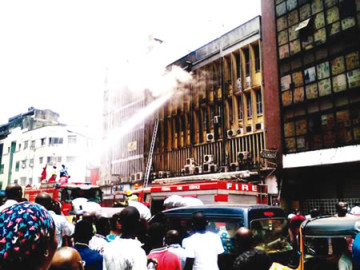 A branch of Skye Bank in Ikeja was consumed by fire in the early hours of yesterday Tuesday September 15, 2015. The Lagos Island fire disaster, according to our source, started around 9am, due to power surge, and all efforts made by the workers at the plaza to extinguish the fire failed.

Passersby and people working in other companies along the nation’s first commercial centre could only watch helplessly.

By the time the officials of the Lagos State Fire Service and men of the Lagos State Emergency Management Agency (LASEMA) who they thereafter invited came, textile materials and fashion accessories, estimated at millions of Naira, have been burnt.

We gathered that while some merchants watched helplessly as their wares burnt, others made a lot of efforts at salvaging their goods, as the firefighters combated the flames. Going by the response from an official of the LASEMA, no life was lost in the disaster.

The Ikeja incident was said to have started around 10:50 am when the Internet server room in the Skye Bank suddenly caught fire which was also caused by power surge according to our sources. The prompt response of fire fighters from the Ikeja fire station, however helped to bring the situation under control on time.

One of the men from the fire service station said, “There was no casualty at all because we were invited on time and we quickly arrested the situation and didn’t allow it to escalate. “We even waited for them to start their banking operation and ensured that there was no problem again before we left their premises,” he added.