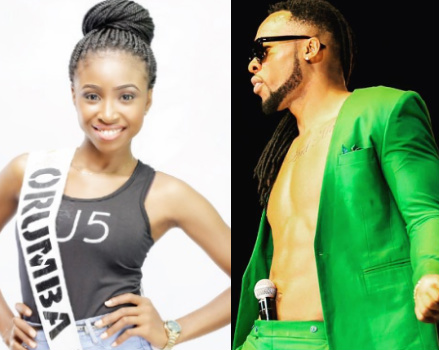 November 1st, 2016 – Flavour Nabania Under Fire For Suggesting He Will Sleep With Chidinma Okeke

The ‘N’abania’ crooner shared a controversial comic post on his Instagram page, @2niteflavour, with a caption in Igbo language reading: “Ataam Cucumber Chidinma”, meaning “I am about to eat Chidinma’s Cucumber.”

Recall that Ms. Okeke is currently entangled in a lesbian sex tape scandal, in a video which has since gone viral on the internet where she was seen having a ‘cozy time’ with her female sex partner, who unconfirmed sources simply identified as Ada.

The video shows her on a lesbian act with Ada, who is reportedly one of her close friends and happens to be her personal assistant and also the 3rd runner up at the queen of democracy, 2014.

The singer’s taunt sprang up mixed reactions. He came under fire as some users threw darts at him, calling him names, while others took sides with him, saying any one had the right to take Ms. Okeke to the cleaners as she was a disgrace to Nigerians and womanhood.