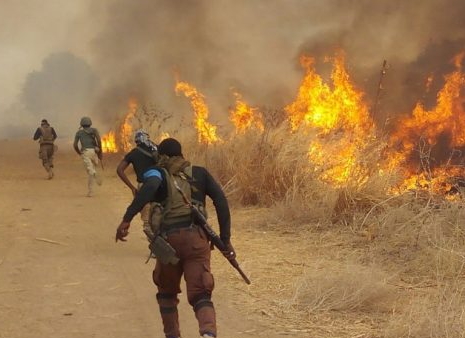 Some suspected Boko Haram fighters have killed five soldiers and injured 19 others, in an ambush they laid in Damboa Local Government Area of Borno State. The ambush also claimed the lives of four vigilantes.

The disclosure was made in a statement by the Acting Director, Army Public Relations (DAPR), Col. Sani Usman. This came as troops intercepted two men at different locations, suspected to be suppliers of drugs and other logistics items to insurgents.

The 19 soldiers that sustained varying degrees of injuries in the ambush are receiving medical attention. “Operation Lafiya Dole troops carrying out clearance operations on suspected Boko Haram terrorists’ hideouts in Talala and Ajigin, southern part of Borno State, were ambushed by suspected Boko Haram terrorists at Ugundiri village, Damboa Local Government Area, Borno State, while returning to base after clearance operations on Saturday.

“The bodies of the late soldiers and civilians have been evacuated to Maiduguri while the injured are receiving commensurate medical care and are in stable condition,” Usman said. He added that: “The troops destroyed the terrorists gun truck and recovered two anti-aircraft guns, two spare gun barrels, one General Purpose Machine Gun, one Rocket Propelled Grenade, one AK-47 rifle and 320 rounds of 7.62mm ammunition. “Troops have been mobilised into blocking positions to further neutralise fleeing Boko Haram terrorists.”

Usman recalled that “another set of troops had earlier cleared Zira, Abulam, Dusula, and Buk villages before returning to base in Bulabulin.” On the separate arrests of the drugs and logistics suppliers, the DAPR noted:

“Troops of Operation Lafiya Dole on patrol from Bama to Pulka, intercepted suspected Boko Haram terrorists drugs and other logistics suppliers from Firgi and Zawan axis, Bama Local Government Area of Borno State, at suspected Boko Haram terrorists crossing point, trying to cross into Sambisa forest on Sunday afternoon. “The troops pursued them, but were only able to apprehend Kadiri Umate, 35 years, while others fled into the bush.

The patrol team recovered 35 packets of 500ml of Glucose Intravenous infusion (Drip), assorted analgesics and pain killer drugs, clothes, bathroom slippers, insecticides, salt, kolanuts and a bicycle. “In a related development, a suspected Boko Haram terrorists’ logistics and fuel supplier, Fantoma Lasani, was arrested on Sunday by troops in conjunction with Civilian JTF at Muna garage when he came to pick his wife to finally relocate out of Maiduguri.

“The suspect, who hailed from Flatari village, Bama Local Government Area, is among some unpatriotic elements in the society that had been supplying Boko Haram terrorists with Premium Motor Spirit and Automative Gas Oil in Bama, Gwoza and Sambisa general area.”