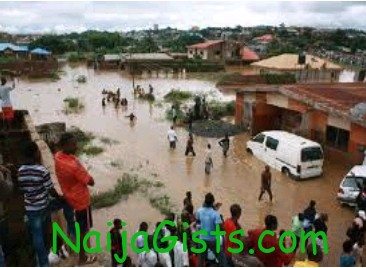 Eleven people were reported killed in the Northern Nigerian states of Yobe and Jigawa while hundreds others were displaced by series of heavy rainfalls that hit the states on Friday. naijagists.com

We learnt the heavy rainfall that started late on Thursday night which continued till Friday evening has killed 9 people in Gashua, Yobe State Nigeria.

Over 1000 houses built with mud was also destroyed in the flooding.

“Nine bodies were brought to the hospital by rescue teams who recovered the bodies from debris of homes destroyed in the flood,” A Paramedic said.

“We lost two people, one in Adele and another in Dangoli village, following heavy rains which resulted in flooding that swept away 10 villages and destroyed around 1,500 hectares of crops,” said Basiru Maje, a local council official.