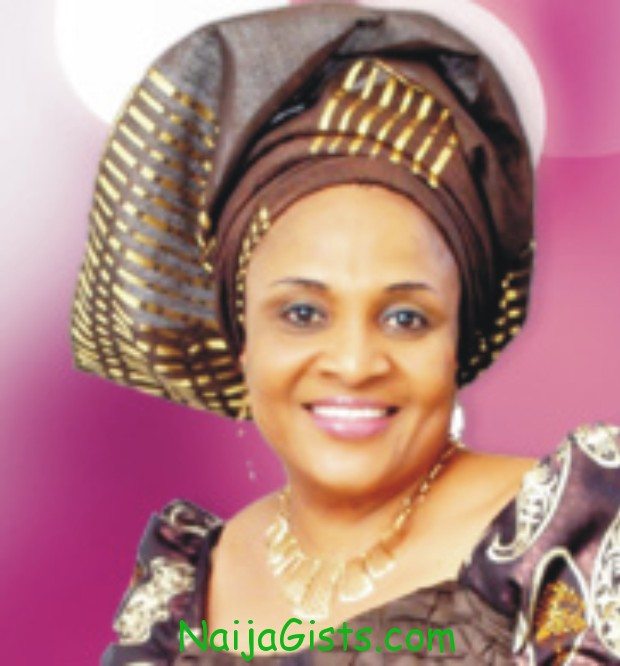 According to News Of The People report,On the 23rd of July 2012, Oyo State Governor, Senator Abiola Ajimobi was reported absent at Oyo State’s exco meeting. naijagists.com

After the meeting, worried members called his residence to make inquiry about his absence. We learnt, His Excellency simple told his kitchen staff members that he wasn’t in the best mood to talk; hence his absence at his meeting.

Apparently, the First Lady of Oyo State, Mrs Florence Ajimobi has been in a bad mood since her multi-million Naira diamond necklance was stolen and her husband had to show concern by staying back to empathize with her.

That Florence wields so much power in Oyo state might be stating the obvious. Aside domestic affairs, her staying power has equally extended to how things are done in the state and it’s very obvious to those in the game. For instance, the appointment of caretaker members for the Local governments in the state last year, had a greater input of the First Lady.

According to a, “even if a Local government caretaker chairman is irresponsible to the people, if such chairman is ‘responsible’ to the First Lady, there is no problem”. A particular chairman, who placed a full page advertorial in Nigerian Tribune of Tuesday, June 19, 2012, listed among his achievements and by extension, success story of Governor Ajimobi as (i) purchase of brand New Toyota Rav4 Jeep for the office of the chairman; observation of weekly and monthly environmental sanitation exercises; sponsoring of people to both Jerusalem and Mecca; regular payment of staff salaries and other ‘Ajimobiphobia Achievements’.

The particular Local government chairman is said to be a favorite of the First Lady and no one dares look the way of querying such bogus achievements, listed in the national newspaper. Last year, when the delegation to go for the Holy pilgrimage to Mecca, was to embark on preparations, Florence was said to have insisted on following her husband, as the First Lady to the Holy Land. According to her, a prayer jointly said is better for the state. No sooner has she arrived, however, was she to lead another delegation to Jerusalem for the Christian pilgrimage; a move that actually raised suspicion in many quarters.

Those who have presented laudable proposals to the state government expressed how their ideas have been frustrated because they could not get the blessings of the First Lady who virtually holds the cake and the knife. Since an unofficial appointment of his daughter as the Personal Assistant to the governor, most of the workings and goings-on in the office are at Her Excellency’s finger tips.

As at the time of writing this report, it was gathered that the couple were in the United Kingdom on an investment drive for the state, and perhaps too, to enjoy the Olympics fever.

Guess the poor man loves his wife to death. Carry go jo nothing do you.

126 Prisoners To Be Executed In Jos, Nigeria
Segun Arinze & Justus Esiri Robbed At A London Hotel