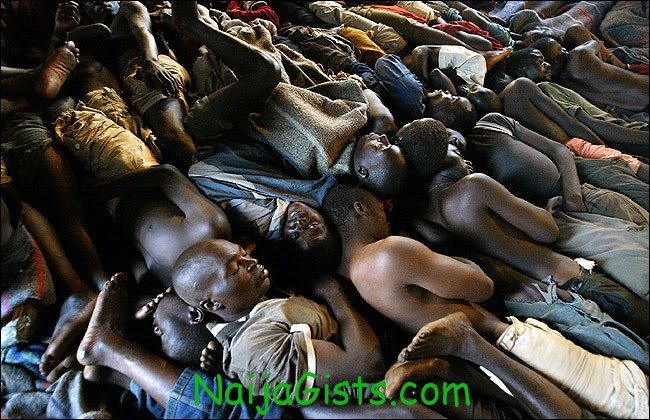 A total of 126 condemned persons are waiting for a date with the hangman in Jos Prison, a News Agency of Nigeria investigation has shown.
A breakdown of the figure shows that Benue has the highest number of 32 condemned criminals, followed by Gombe, with 23.

The details further show that Yobe has 21, Plateau, 14, while Kogi and Adamawa have 13 and eight respectively. Taraba and Bauchi states have four condemned criminals each, while some other states have between one and two.
A senior official of the Jos prison services, headquarters of the North-Central and North-East zones of the service, told NAN that some of the convicts had appealed their sentences, while others had exhausted all legal opportunities for a reprieve.

The source alleged that the attitude of the condemned criminals had become a major source of concern for the prisons authorities and the workers, and called on the respective state governors to exercise their powers to help the situation.

“In fact, the Jos prison authorities have applied for the transfer of 50 of the condemned criminals to other prisons, to ease the pressure here.
“The governors have the powers to order for the execution of the prisoners or grant them amnesty. I will appeal that such powers be used to ease the pressure on the prison system.

“Some of the inmates have actually shown remorse and I believe some will be good citizens if they are granted amnesty,” the source said.
NAN recalls that officials of the prison last month foiled what was believed to be an attempt to attack it when unknown persons stormed the gates in three jeeps.

The unknown men had claimed that they had been assigned to drill a borehole in the prison, but refused to open their vehicles for checks by security men at the gate, and fled when the police were alerted.
When contacted, Controller of Jos Prison, Dr. Samuel Agidi, confirmed that the facility was hosting some condemned criminals but declined to give details.
He commended the Federal Government for providing adequate facilities, especially for that group of convicts, and explained that a borehole was recently drilled in their compound to ease water shortage.

Agidi said that other prisoners were being trained in various skills and declared that he was “very impressed” with the inmates’ commitment to learning some skills that would make them useful to themselves and the society after serving their terms.
He listed skills taught in the prison to include tailoring, shoe making, electricity wiring and electronics repairs.(punchng)