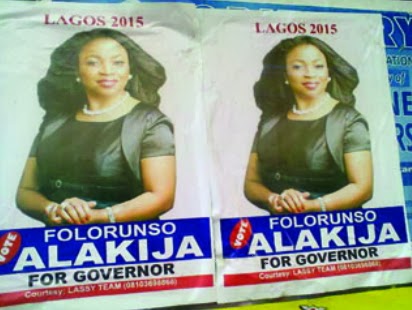 Posters of Alakija are already on the streets. The posters have equally flooded the Lagos State Government Secretariat, Alausa inviting people to support her ambition for the governorship seat.

The caption on the posters read: “2015: Vote Folorunsho Alakija for Governor.” The posters did not specify the party Alakija will be contesting.

It could also not be ascertained if the posters emanated from her as efforts to get her to comment on issue proved abortive at press time.

Calls made to her phone was picked by a white man who said she was in a meeting and that she would call back after the meeting, but she never did.

Alakija is seen by many as a woman of impeccable character and one that could provide the needed leadership to move Lagos forward, but with the dominant All Progressives Congress, APC, in power in Lagos, it is doubtful if she can achieve her aspiration outside the party.

In 2013, Forbes named Alakija as the richest black woman on earth as she defeated the television show-host and actress, Oprah Winfrey. By November, 2013, Forbes put her net worth at $2.5 billion. But by January 2014 her net worth had skyrocketed to $7.3 billion courtesy Mail of UK, beating Oprah Winfrey whose net worth is now $2.9 billion to the second place.

She worked as a secretary in a Nigerian Merchant bank in the 1970s and later left to study fashion design in England. She subsequently founded Supreme Stitches, a Nigerian fashion label that catered for upscale clientele, including the late Maryam Babangida, wife of Nigeria’s former military Head of State, General Ibrahim Babangida.

It was during the reign of Babangida that her company Famfa Oil got an oil prospecting license which went on to become OML 127, one of Nigeria’s most prolific oil blocks. Famfa Oil owned a 60% stake in the block until 2000, when then President Olusegun Obasanjo acquired a 50% interest in the block. Famfa Oil went to court to challenge the acquisition, and the Nigerian Supreme Court reinstated the 50% stake to Famfa Oil in May 2012.

Her 60 per cent stake in the block is currently valued at around $7.3 billion, Ventures Africa reported.

Alakija was born on 15 July, 1951. She originates from a large family: her dad had eight wives and 52 children in his lifetime and she was the second surviving child, her mom was the first wife.

She and her younger sister were sent to school abroad when she was seven years old. They went to a school in Wales, a private school for girls in Northern Wales, and they were the only coloured (black) girls in the school. And because their fellow mates couldn’t pronounce their names, they coined them names-Flo for Folorunsho and Doyle for Doyin. They were in the school for four years, and at age 11 she and Doyle moved back to Nigeria at the request of their parents who didn’t want them to lose their African values, culture and tradition.

Alakija got married in 1976 to her loving husband and between them they have four kids, all boys. All of them schooled abroad and are all engaged one way or the other in the family business.

Folorunsho’s mom used to be a fabric merchant and she used to help out, and through that she learnt a lot. After leaving the corporate world in the early 80s (1984), she went to the UK to study fashion designing.

She came back to Nigeria in 1985 a year after her training and started her fashion house-Supreme Stitches at a 3-bedroom apartment in Surulere, Lagos, and a year after establishing the company, she emerged as the best designer in the country in 1986.