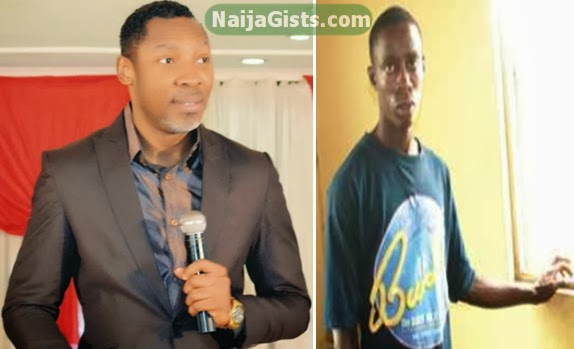 Popular Lagos-based showbiz Pastor Sign Fireman who was arrested 2 days ago for his alleged involvement in a ritual murder case has spoken up.

While speaking with the media, Dr Sign Fireman said:

“I don’t know that boy and if anybody should know him or his family as members of our church, it’s the Badagry branch pastor.  I am the GO of my church. You can imagine how possible it would be for an 18-year-old boy from a distant branch to have easy access to me talk alone contracting him to kill someone on my behalf.”
Meanwhile, the mother of the boy who killed the 12-year-old virgin girl has also spoken. She said her son is possessed by a demon that often forces him to misbehave. She also said a neighbour cursed him when he allegedly beat up his daughter.
Mrs Esa Egbo told journalists on Thursday that his 18-year-old son, Ikechukwu Lucky is possessed by an evil spirit that has been tormenting him since he was placed under a curse.
IK’s mother said her family are members of Pastor Sign Fireman’s church in Badagry Lagos.  She also said her son doesn’t know the Pastor whom he claimed sent him to kill the virgin girl.
She explained that two years ago, a neighbour laid a curse on her son and after then he started behaving strangely, thereby attempting to rape little children whenever he sees them.
According to her, “He started two years ago to molest girls in attempt to rape them. It is not an ordinary thing. You know some people are very good in hurting other people’s children. So for that reason I am suspecting that. He has been staying with me from birth and just two years ago when he was 16 years old, a man who lives close to us laid a curse  on him.
“What happened was that we have a well in our compound and Ikechukwu and one of the man’s daughters were at the well fetching water and they had a quarrel.
Ikechuwu beat up the  girl and when the man returned he brought out a belt to whip Ike and I prevented him. He started boasting that he was going to make Ike useless and miserable. I thought he was joking but after that Ikechuwu started behaving funny.“Whenever he goes out during the day and sees a little girl he would grip and attempt to rape her and the girl would scream alerting people around, who would arrest and beat him up before handing him over to the police at Badagry Police Station.
Demonic possessed Ikechukwu Lucky has been arrested by police 4 times for attempted rape.
Continue Reading
You may also like...
Related Topics:boy, demon, pastor sign fireman, possessed, ritual murder, Virgin