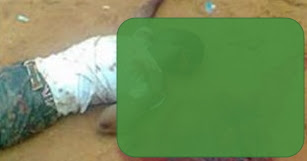 A former cultist who gave his life to Christ has been found murdered.

The victim simply identified as Wale was lured to Winners Primary and Secondary school inside Tinumola Estate in Osogbo Osun State by members of his former cult group yesterday.

They used a big stone to shatter his head before removing his eyes with a sharp knife.

Residents of the estate fled for fear of being arrested when police stormed the estate for investigation.

A suspect has been arrested in connection with the murder while the body of the deceased has been deposited at LAUTECH mortuary.