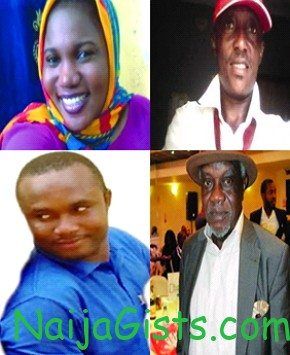 Year 2013 is obviously not the best year for the Nigerian movie industry, Nollywood. So far this year, the industry has lost four actors; Bisi Komolafe, Lugard Onoyemu, Collins Ifeanyichukwu and Justus Esiri.

On 1 January, the industry was hit by the shocking demise of young actress, Bisi Komolafe. The actress, who belonged to the Yoruba sector of Nollywood, died after she had a miscarriage. There were plans to fly her out for proper medical treatment when she passed on.
Lugard Onoyemu, slumped and died at the National Stadium, Surulere on 14 February

Lugard Onoyemu, slumped and died at the National Stadium, Surulere on 14 February

Former Secretary General of AGN, Lugard Onoyemu, slumped and died at the National Stadium, Surulere at about 5:30p.m. on 14 February. He will be buried today.

A day after Lugard’s death, Collins Ifeanyichukwu, an actor and movie producer based in Abuja also died. A registered member of AGN, Ifeanyichukwu died on 15 February at the Maitama General Hospital after a brief illness. He is survived by his wife, Blessing Collins, and less than a year-old son, Doxa Efechukwu Collins.

Apparently, the industry was yet to recover from the sad news of these thespians when the biggest one happened; legendary actor, Justus Esiri, 70, passed on this week.

These developments have further heightened the fear among Nigerian actors. Most of them have admitted that the successive deaths are spiritual, and perhaps, a call for them to move closer to God.

National President of AGN, Ibinabo Fiberesima, said: “With the incessant deaths in the entertainment industry this year, it is high time we put a stop to it. We must surrender our lives to Almighty God irrespective of our religious beliefs. Let’s come together and embark on prayers and commit our industry and practitioners to God. We need serious prayers. We must reject death in the entertainment industry. Join us irrespective of your status, age, beliefs, profession, etc. Let’s pray.”

The guild’s Secretary General, Abubakar Yakub, while speaking with  Entertainment Cafe, simply said: “I don’t understand what is going on anymore. Why has death focused on our industry?”

Two years ago, following the successive deaths of some iconic figures in the movie industry, the General Overseer of the Redeemed Christian Church of God, RCCG, Pastor Enoch Adeboye, organised a special prayer session for the entertainers. The event, which was held at the church’s headquarters in Ebute-Metta, Lagos, was aimed at praying against deaths and sickness among Nigerian entertainers.

Early this year, the Igbo Filmmakers Forum also gathered members at White House Hall, Ikeja, where they prayed fervently against deaths in the industry. But death has continued to bare its fangs.

Question Of The Day: Is It Proper To Answer Sir To Your Husband?
Pastor Taribo West Blasts Osaze Over Twitter Comment: “Did I Ask You For Money? Learn To Respect Your Elders”