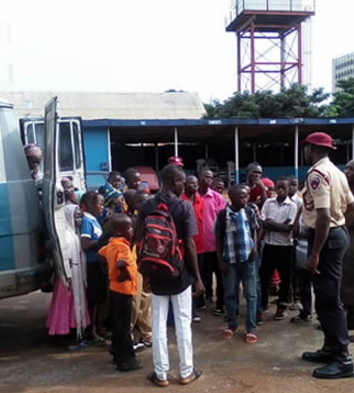 HEKAN, The United Church of Christ in Nigeria has described the reported arrest of some child traffickers with 40 suspected trafficked children, by personnel of the Federal Road Safety Corps (FRSC), as false.

The church said the 42 people arrested were 40 of its Sunday School pupils and two of their teachers, who were on their way to attend the National Sunday School Camp at the church’s headquarters in Kaduna.

FRSC had on Saturday last week, said it arrested a vehicle for overloading and broken windscreen, which was later discovered to be occupied by suspected child traffickers with minors heading to an unknown destination.

The Head, Media Relations and Strategy, FRSC, Bisi Kazeem, in a statement, stated that the vehicle, a silver Ford Galaxy with number plate LMU76XA, was travelling from Kano to an undisclosed location on Thursday at 11:55 am, when an FRSC patrol team in Kaduna State flagged down the driver, who refused to stop.

However, the United Church of Christ in Nigeria, HEKAN in a statement issued in Kaduna on Friday condemned in strong terms, what it termed, the arrest of 40 of its Sunday school pupils and two teachers who were arrested by personnel of the Federal Road Safety Corps Kaduna state command while on their way to attend the annual HEKAN National Sunday School Camp at the church Headquarters in Kaduna

The statement signed by the Vice President of the church, Reverend Emmanuel Nama said the children left their homes with the consent of their parents and their resident Pastors to attend the annual HEKAN Natioanl Sunday school camp.

According to the church, ‘The 42 persons were arrested along Ali AKilu road in Kaduna at about 4; 30pm Wednesday evening and were also been maltreated by the FRSC personnel.”

“The FRSC had earlier held a press briefing and snap shots of the children stating that the children were taken for trafficking before handing them over to the Kaduna state Police command without confirming from the church authority despite all explanation by their teachers on their movement”.

Reverend Nama also said the children are presently at the Headquarters of the United Church of Christ in Nigeria HEKAN Katsina road for the Annual Sunday school camp.

The church authority however called on the authorities concerned to investigate the matter and also demanded for public apology from the FRSC Kaduna state Command.

“The church is calling on the general public to disregard the news given by the FRSC Kaduna command which says it arrested a vehicle for overloading along Kaduna-Zaria road, which was later discovered to be occupied by suspected child traffickers with 44 minors.

“We are stating categorically that, the story painted by FRSC is false and baseless. Those arrested are genuine members of the United church of Christ in Nigeria HEKAN DCC Gubuchi in Makarfi Local Government Area of Kaduna state”, HEKAN leader said.