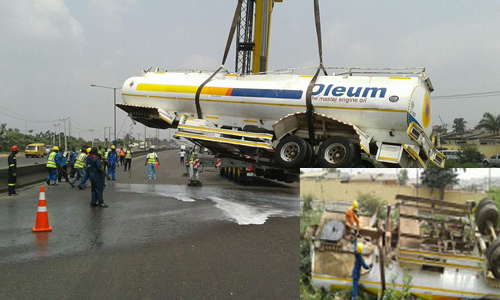 A fully loaded fuel tanker on Wednesday fell off the Otedola Bridge near the Lagos State Government secretariat, spilling it all on the road.

The accident was caused by brake failure.

The tanker was heading to Ibadan, the Oyo State capital, after loading in Apapa. It plunged into a nearby ditch after detaching from the truck.

Operatives of Lagos State Fire Service and Lagos Emergency (LASEMA) removed the tanker from the scene.

They barred vehicular movement until the clean-up of the road.

Lagos State Fire Service Director Rasaq Fadipe said the spillage was diluted and mopped before the tanker was recovered from the ditch.

He said the driver knew the truck had brake issues but still tried to manage it to Ibadan.