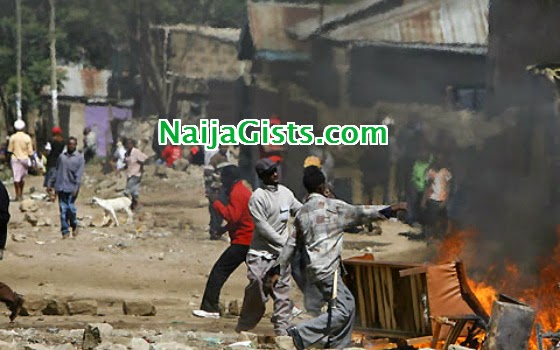 At least 2 people died while property worth millions of naira were destroyed following a clash between Fulani traders and Yoruba natives of Oro-Ago in the Ifelodun Local Government Area of Kwara State.

Our correspondent gathered on Wednesday that some youths allegedly razed at least five vehicles and 10 motorcycles, said to be owned by Fulani people, in the ensuing pandemonium.

A source, who pleaded not to be named for fear of attack, told Metro that the mayhem was allegedly caused by Fulani-Bororo settlers who allegedly flouted a rule in the area that settlers should never bring arms, ammunition and fighting sticks from their settlements to the market on market days.

He stated that some armed Fulani traders came to the market on Monday, adding that the vigilance team and hunters in the area accosted them and seized the weapons.

The source said the leader of the Fulani people in the area, popularly called Serikin Fulani, stormed the place where the ammunition were kept, took the weapons seized by the vigilance team and handed them back to the Fulani traders.

The source said the hunters and vigilance team, saddened by the development, attempted to retrieve the weapons from the Fulani people.

According to him, violent clash erupted between the two camps leading to a breakdown of law and order.

A phone repairer, Sogo Babarinde, who is one of the youths in the community, and another yet-to-be indentified person, said to be a Fulani, were killed in the clash.

Our correspondent gathered that palpable fear had enveloped the residents of the area who were afraid of resumption of hostilities.

It was gathered that security operatives involving military and police personnel had been drafted to restore normalcy in the area.

He said, “Two people were killed during the clash. Security agencies are on ground in the area. They have also restored normalcy.

“In addition, a committee comprising the natives and the Fulani people has been constituted to finally resolve the problem.”

Continue Reading
You may also like...
Related Topics:Fulani, Traders, yoruba